Infocast, the same folks who brought you the Additive/Aerospace Summit, have introduced a new cross-industry 3D printing related event, the Additive Disruption Summit. To take place in San Francisco from March 24-26 of this year, the summit will bring together members from huge corporations — such as Amazon, Honeywell, FedEx, Lockheed Martin, Citigroup, IBM, Ford, and more — and large 3D printer manufacturers — 3D Systems, EOS, Stratasys, SLM Solutions, among others — to discuss how 3D printing will disrupt the marketplace and what individuals and companies can do to prepare for (or catch up) and take advantage of the upward trend. 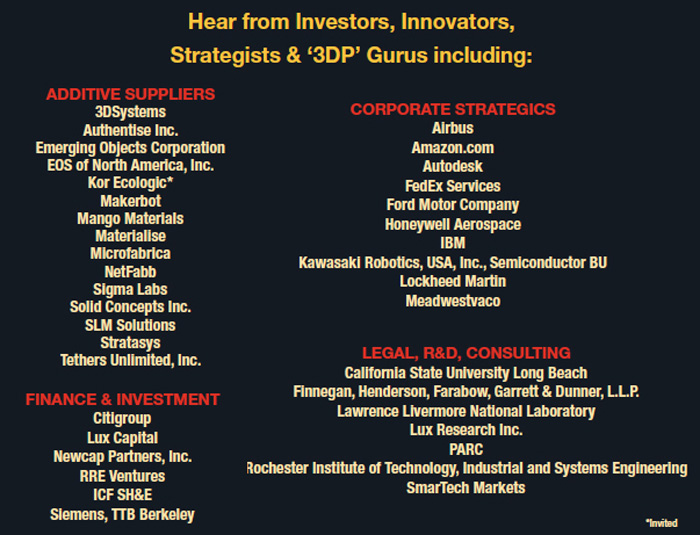 The first day of the event includes a number of talks and panel discussions that will prove vital for understanding the ground-shaking effects that 3D printing is having and will have on existing paradigms of manufacturing and retail. “‘Known Unknowns’ – Getting to Grips with the Unpredictable Impacts and Vectors of 3D” will feature a table full of Fortune 1000 directors that will discuss how big corporations can come to terms with technologies that may be outside of their direct control. This may be more of a support group than a panel, with the directors discussing crowd-sourcing and distributed manufacturing and the social, legal and technological breakthroughs that occur with those web-related developments. Managers from MeadWestvaco, ISC Sourcing, Honeywell Aerospace, Ford Motor Company and PARC , as well as Ken Wong, an analyst from Citigroup, will all be there. I’ll ask him why my application for a Citi Simplicity Credit Card was declined.

John Hornick, a patent lawyer who’s written for 3DPI on occasion, will also help such companies prepare for the future with his talk “Away from Control”.  Based on the lecture he gave at the Inside 3D Printing event in San Jose, I think that John might suggest the inevitability of consumer/prosumer control over their own goods. In turn, it’s possible that he’ll recommend companies learn to deal with the loss of control in healthy, productive ways that utilize new economic strategies, rather than the sort of legal retaliation seen by record labels after the invention of Napster.

The second day will see some interesting lectures surrounding bioprinting, 3D printing in architecture and 3D printing in space. Rob Hoyt, of Tethers Unlimited, will most likely discuss the SpiderFab 3D printer that his team is building for NASA to construct large structures, such as solar arrays. Ronald Rael from Emerging Objects will hopefully give an exciting talk about his company’s 3D printing of unique materials, such as salt and concrete, for architectural elements and, possibly, large-scale structures. The day will also have market analysts and venture capitalists explore the future of investing in 3D printing in two separate panel discussions, titled “Market Forecasts: Prospects and Challenges of Different Additive Niches” and “Views from the Investment and Strategic Venturing Community.

Like the Additive/Aerospace event, this series will have a pre-summit workshop series with a number of members of the additive manufacturing industry supplying much needed information about the field for those who may be unfamiliar. A representative from Lockheed Martin, for instance, will talk 3D printing for aerospace, while Scott Killian from EOS and Henner Schoneborn from SLM Solutions will each give presentations on 3D metal printing. Professor Denis Cormier will cover how the Rochester Institute of Technology, Industrial and Systems Engineering is using multiple material printing and Christopher Spadaccini, from Lawrence Livermore National Laboratory, will give attendees an overview of 3D printing electronics into functional devices. Those last two talks, in addition to Allison Pieja’s talk on renewable resins, would definitely be two workshops that I would want to attend.

After attending the Additive/Aerospace Summit, which featured some really big players from Northrop Grumman to GE, I’d have to say that this event is one to attend.  What I saw coming out of the aerospace series was, in addition to new business partnerships, the solidification of the relationship between additive and traditional manufacturing. Aerospace manufacturers and 3D printing companies voiced their needs and what they brought to the table so as to unite the two industries even further. This event, then, promises to do the same for traditional businesses and members of the 3D printing community. What we’ll see after the Additive Disruption Summit is a group of people ready to take on the new technology as it saturates the marketplace.

Right now, Infocast is offering an early-bird special to attend. The tickets for the event are $1,095 and $595 for the pre-summit workshops until February 21. The prices then go up to $1,495 and $795, respectively, after the special is over.  If you’re a 3D printing start-up or fab shop, you receive a hefty discount: $595 for the event and $395 for the workshops, with the early bird, and $895 and $595, without. If you can get the dough to go, you really should.  If dough poses no problem for you, be wary of riding any buses with the word “Google” on the side while attending the event.