According to Seuffer, the Question is not Why Would You Implement 3D Printing — It’s Why Wouldn’t You?

The reasons for introducing 3D printing technology into various stages of the manufacturing process are fairly well documented — shorter lead times, reduced costs, elimination of tooling in some cases, and so on.

But the figures being quoted in the latest industrial case study from Stratasys are compelling — by anyone’s standards, I would imagine.

Today, Stratasys has revealed how one of its customers — Robert Seuffer, GmbH & Co. KG (Seuffer), a German supplier of parts for household appliances  and commercial vehicles, has incorporated Stratasys 3D printing into its manufacturing process and reduced the time and cost of producing injection moulded sample parts, by 97% and 98% respectively. 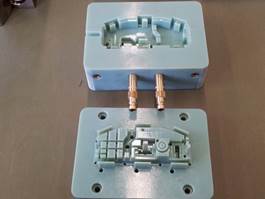 Prototype evaluation ahead of the actual injection moulding process is a given these days and the ability to dramatically streamline the tool creation process for producing these prototype parts is an area recognized by manufacturers to bring huge benefits. This is precisely what Seuffer has done to its manufacturing process Stratasys systems.

Andreas Buchholz, Head of Research and Development at Seuffer, explains the upgraded process and the savings the company is achieving:

“Working with the automotive industry, sample parts need to be tested in the environment of moving mechanical parts as well as in high temperature environments. With Stratasys 3D printing, we can design first drafts of the injection mould within a few days and 3D print them in less than 24 hours for part evaluation. Traditionally, it would take eight weeks to manufacture the tool in metal using the conventional CNC process. And while the conventional tool costs us about 40,000 euros, the 3D printed tool is less than 1000 euros, a saving of 97%.”

“Companies worldwide are looking to introduce significant efficiencies to their manufacturing processes when introducing new products, and are discovering the many benefits of additive manufacturing, also known as 3D printing,” said  Andy Middleton, General Manager, Stratasys EMEA at Stratasys. “More and more manufacturers are adopting 3D printed tools as a complementary injection moulding solution – not only to cost-effectively test products before mass production, but also to produce customized parts.”