A collaboration between the School of Art Institute of Chicago (SAIC), Printrbot, Taulman 3D and Simplify 3D, resulted in a very successful summer of 3D printing for the incoming Master of Design students at SAIC. Each year, the SAIC runs a 6-week bootcamp for students ahead of their full course, designed to allow them to explore the how and when of rough and refined design visualization and prototyping. According to Brian Anderson, course leader: “Through daily and weekly projects the class advances digital design skills and gains comprehensive exposure to the fabrication and production capabilities across the School of the Art Institute of Chicago.”

For this year’s bootcamp, the collaboration with Printrbot (3D Printers),  Taulman3D (filament material) and Simplify 3D (software) saw the students all individually equipped with these tools to personally explore their design ideas and 3D printing. Indeed, the SAIC received the first Simple machines shipped from Printrbot. According to Brian, the Simple is inexpensive enough ($300) to consider consumable or semi-consumable or as having a limited lifetime that can be extended by re-purposing components or rebuilding the machine. A course budget that could cover one semi-pro machine comes close to outfitting an entire class with 3D printers. Taulman 3D, meanwhile, helped the course acquire 645 and 618 nylon filament and an advanced quantity of the newly released T-glase material and Simplify 3D pre-released a version of their Creator software, modified to communicate with Printrbot boards.

Using these capabilities and tools students on the course were encouraged to explore approaches to visualization and construction ranging from the simple to the sophisticated and to exhibit drawings and objects developed through integrated approaches. This culminated in a week-long 3D printing intensive focused on the idea of ubiquitous 3D printing — “Immediate Objects” — to produce simple, yet essential everyday objects as well as more developed products.

Brian stresses that: “the 1:1 ratio of printer to student [was] a big thing and an experiment worth running. Simply demonstrating the possibility was a win. In the classroom there was zero distance separating the CAD environment with 3D output for all students. And what was once black-box technology for most grew into an intimate relationship (of understanding, tending, tuning, and maintaining) with machine and material. The class named the machines, and by the end of the course each bot had a recognizable personality.”

“Accepting students were likely to be at different points in learning and project work in an information-noisy, trial-and-error learning environment, curricular material was delivered through video tutorials. The classroom was run as a minimally-structured collaborative studio in which the fleet of machines was nimble, responsive, active, demanding and rewarding. Across an intensive period of use (not all students printed at the same time) momentarily redundant machines were cycled through the classroom when there was more than a need for re-calibration.”

In the interests of sharing, alongside the physical product output, the class also produced short videos to convey the nature of their product(s) as well as demonstrate the success of the course itself. The Immediate Objects series assumes future ubiquitous printing — each short video asks not what can be printed now, but muses about a not-so-future world where 3D printers are as familiar as domestic objects? In itself this is not a new concept, many have pondered (and written endlessly!) about what the future holds for 3D printing, but the nice angle here is that a new generation is being asked the question, and tooled up to explore potential answers, including: 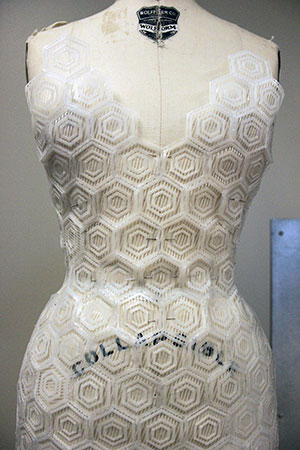 OUR PAL from SAIC Designed Objects on Vimeo.

And what if we printed clothing at home that we could wear on the town?

The ideas are cute, the dress is impressive and it all points to an interesting future for 3D printing, but the idea I like the most is giving kids the hands-on opportunities to explore that future now!