Students 3D Print Scorpion Robot with Quite the Sting

As if the Atlas robot, Boston Dynamics’ bipedaling robot with 3D printed legs, wasn’t proof enough of the inevitable robot takeover… Now, three students from the Belgium-based Ghent University have used 3D printing technology to create a robotic scorpion with an autonomous and functional stinger. Working out of the university-affiliated Industrial Design Center, Electronics Engineering student Pieterjan Deconinck and Industrial Design students Stephan Flamand and Robbe Terryn were tasked with redesigning the Stigmergic Ant Hexapod Robot, a less threatening robotic insect designed by a previous student. What they ended up creating was the Scorpion Hexapod, equipped with 3D printed components and a stinger with a mind of its own. 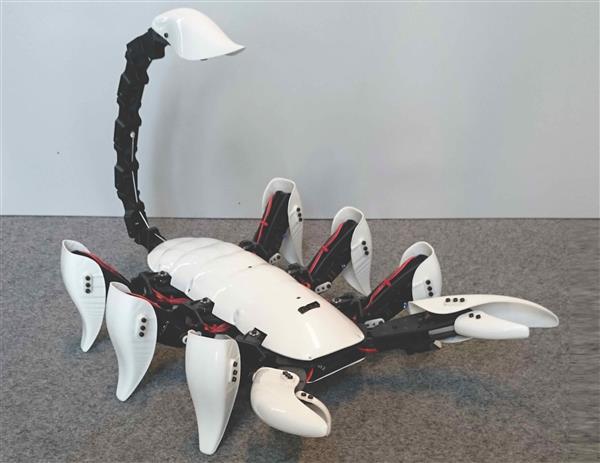 The project, which was a part of the ‘Mechatronics Design and Embedded Prototyping’ course being taken by the students, utilized 3D printed parts for mechanical components, including the connectors between the legs and the claws, a wheel for the tail actuation mechanism, and all of the tail modules. The students used the IDC Protlab’s Ultimaker 2 to print the components in both PLA and, for parts the required more strength, colorFabb_XT. The remainder of the body frame, which was designed in Siemens NX software, was produced with laser cutting and filled out with foam, cut with a CNC milling machine. 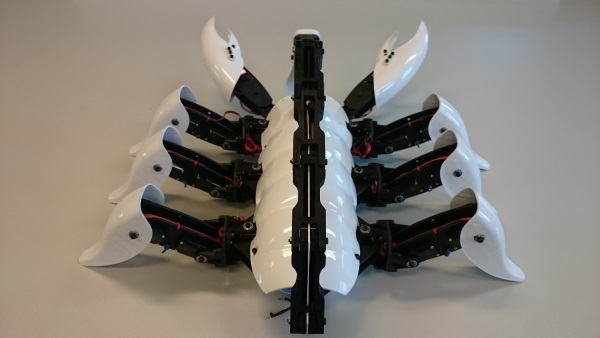 “Our goal was to design an impressive, digitally designed robot with lots of possibilities towards interaction and functionality,” said Terryn. “The scorpion seemed the appropriate animal as an inspiration for this robot, because the tail and claws could be given all kinds of functions.”

The 3D printed tail, which functions autonomously, ‘stings’ anyone who approaches and covers the robot’s eyes. It isn’t venomous or painful, but it does demonstrate the mechatronic functions that the team of students were able to achieve. They’ve currently implemented two modes in the Scorpion Hexapod. It has an autonomous mode, where it uses sensory input to interact with the surrounding environment, and a remote mode, in which it is controlled with a GUI. The modular nature of the 3D printed scorpion makes it possible for the hardware and software to be easily modified and expanded. 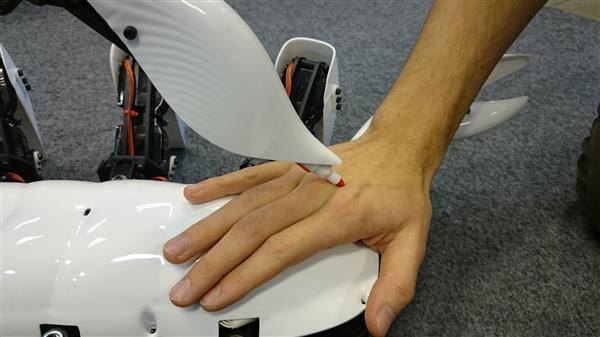 Since production, the Scorpion Hexapod was been crawling around various Industrial Design Center expositions, sending a polite sting to any visitors that dare approach it. Though the stinger may not be lethal, the natural body movement and design is enough to get my heart racing. The project showcases the advancements that have been made on autonomy and modularity in robotics, and is sure to give some unsuspecting visitors a quick fright. Personally, I just hope that if these autonomous robots ever turn against us, we have the 3D printers on our side!