When the idea of a medical transplant is brought up, most people’s thoughts are usually drawn to procedures such as blood transfusions or organ replacements. But, oftentimes, we forget the importance of our bone structure, as well as the 2 million painful bone transplants that take place every year around world. Previously stuck in a Medieval-like operation method, surgeons had little option but to replace their patients’ bones with the bones of animals or human cadavers, and even this procedure can oftentimes led to complications due to the body’s rejection of the foreign replacement. But 3D bioprinting has been a major influence in changing the entire nature of this traditional surgical procedure, new methods of creating bone grafts have been developed by researchers around the world from Montana State University to Tokyo. 3D printing has become a recent revelation in skeletal reconstruction surgery, with 3D printed synthetic implants and even harvested stem cell materials proving to be a much safer and efficient surgical alternative.

One NYC-based startup called EpiBone is taking these biomaterials to a new level, working to ensure the success of bone replacement surgery by creating biomaterial from each patient’s own stem cells. After taking a CAT scan, which EpiBone CEO Nina Tandon says is ‘essentially a high-resolution 3D X-ray’, a personalized 3D printed scaffold is made in the exact shape of the bone being targeted for repair. EpiBone plans to extracts the stem cells using a sample of the patient’s fat, which is then infused with the 3D printed scaffold. The stem cell-infused scaffold is then placed into a ‘bioreactor’, which is a special growth chamber that imitates the condition of the human body (such as temperature, humidity, acidity, and nutrient composition) to allow the stem cells to transform into osteoblasts, which are the bone-growing cells needed for the completed living bone replacement.

After three weeks in the bioreactor, the scaffold becomes colonized with living tissue, creating a perfectly shaped bone replacement made from the patient’s body, which EpiBone hopes will greatly reduce the chance of causing rejection in the body. Tandon is an extreme advocate of introducing stem cells into medical treatment, and as 3D bioprinting continues to expand, I can only expect the ability to properly introduce stem cells into medical procedures to expand as well. “What’s most inspiring to me about the evolving science of regenerative medicine is how it recasts the role and potential of the body’s own cells,” Tandon said in Live Science. “No longer seen simply as the passive subjects of treatments, cells are now active agents. They are collaborators. And they are the kind of naturally powerful actors that you really want on your team.” 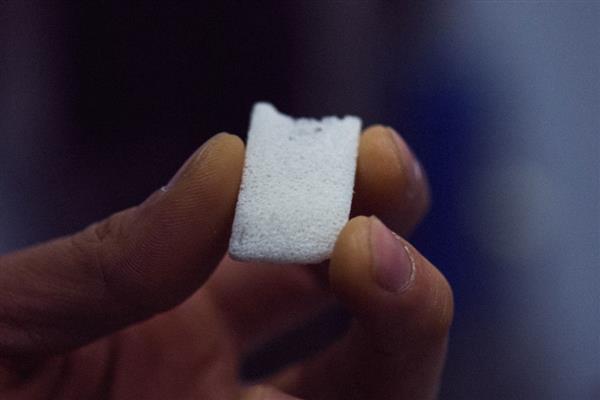 Thus far, EpiBone has succeeded in implanting these artificial bones into pigs and other animals, but has yet to prove the success in a human subject. Though this research is a potential breakthrough for skeletal reconstruction, Tandon believes that their work at EpiBone can eventually expand beyond both bone replacements and the medical industry as a whole. “If we can work in concert with living cells to grow bone, we might also adapt cells to groundbreaking new uses in other realms of medicine, or even entirely different fields, such as architecture, art and fashion,” she added. Tandon and the EpiBone team acknowledge that they have more work to do before their unique bone replacement process is used on human patients, but their research thus far should have surgeons excited for a procedure that is traditionally quite uncertain and grim.