It’s been awhile since we had to cover news of gun printing advocacy group Defense Distributed and its crypto-anarchist leader, Cody Wilson.  But it’s a new year and the fear surrounding 3D printed guns has to be stirred up again before 2016 gets completely under way.  Yesterday, UK tabloid The Daily Mirror has done what gossip rags do and stirred up gossip about the potential of terrorists getting their hands on 3D printed machine guns after revealing that Wilson and Defense Distributed had created plans for a 3D printable AR-15 semi-automatic rifle. 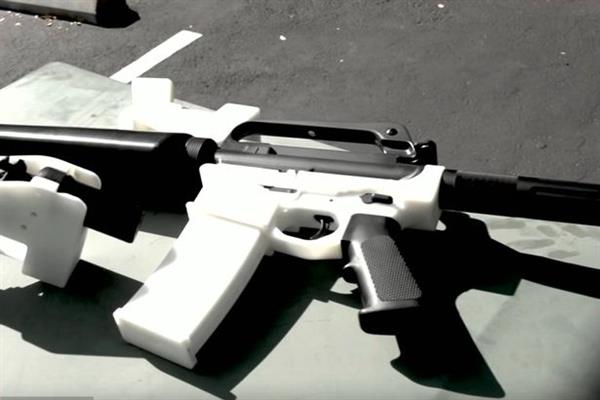 Wilson and his arms non-profit first made headlines when they released the 3D printable files for their Liberator handgun, which was subsequently removed from the Defense Distributed in response to demands from the State Department, but not before the files were easily shared widely on torrent sites. While Defense Distributed seeks to sue the US government for preventing the organization’s freedom of speech, with 3D files constituting the speech according to Defense Distributed, legislators in the US and abroad have sought to pass laws related to gun printing. Their fears are related to the off-the-grid manufacturing of weapons by criminals or the ability to carry non-metal weapons passed metal detectors.  Defense Distributed has also created a CNC mill, dubbed the Ghostgunner, framed as a means of manufacturing metal assault rifle parts.

In a Mirror story published yesterday, Wilson tells the paper that he already has the files for a 3D printable semi-automatic, but that he has not yet released them, due the legal battle in which he is currently embroiled with the US State Department. “I promise you the reason you haven’t seen this yet is because it has been artificially delayed. I would have ­demonstrated this for you if I was allowed to. I am fighting my fight with the government but we have a whole new range of things.” When asked if he had a “downloadable 3D machine gun”, Wilson replied, “That’s ­basically what I’m telling you.”

Because 3D printed weapons have been found on crime scenes, the tabloid goes on to extrapolate the use of 3D printed weapons by terrorists, with chemical weapons adviser Hamish de Bretton Gordon telling The Mirror, “This is making terrorists’ jobs so much easier. Particularly in the UK where security services are putting in so much effort to prevent an attack by one of [ISIS]’s ‘clean skins’. The person who is releasing this is completely irresponsible. We can only hope the authorities in the US are going to deal with this individual. It’s absolutely crazy.”

In the interview above, Wilson responds to concerns surrounding the abilities of individuals manufacturing weapons at home by pointing out that mass manufactured weapons are the main source of arms worldwide, “Whenever these people get on TV and point the finger at the hobbyist, they fail to mention many AR-15s they themselves are shipping to Mexico, Al Nusra, through Turkey with CIA operations all over these theaters of war in the Middle East.”

In the 3D printed gun discussion, 3D printing enthusiasts express fears that desktop fabrication will be regulated, with legislators focusing on regulating the technology as a whole.  When the issue does arise, I think that Wilson does bring up a valid point. Just as 3D printing is probably less of a concern for gun control advocates in the US, given the ease of purchasing weapons at big box stores and gun shows, it is also probably less of a concern in the fight against terrorism, given the role that the global arms trade plays in getting professionally made weapons to terrorists.