After having transformed the world of desktop 3D printing with his original wood and stone filaments, German inventor Kai Parthy has teamed up with 3D printer manufacturer ReprapUniverse to create a hotend capable of handling all of his specialty materials. On top of that, the 1730 Full Metal Hotend can handle both 1.75 mm and 3 mm filaments with the quick change of a nozzle. 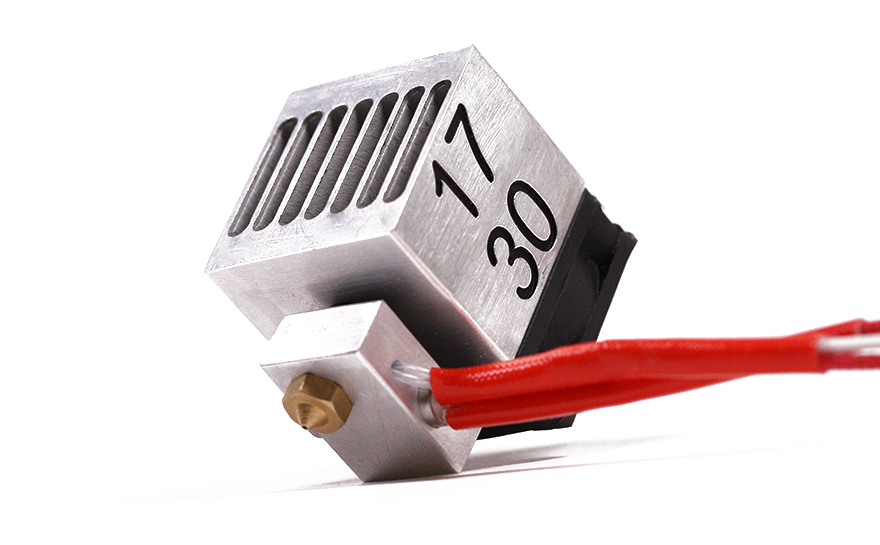 Combining their respective ten years of experience, Kai and ReprapUniverse have created the 1730 Full Metal Hotend to be as versatile as possible for FDM 3D printing.  Uniquely, the component has a modular setup that combines a direct drive and bowden architecture, to allow for quick and easy nozzle changes. Handling 1.75 mm and 3 mm filaments only requires swapping out nozzles, a process expected to take less than five minutes.  And, because the hotend is all metal, without any PEEK or PTFE tubing, it can reach higher temperatures to handle a wide variety of material types, from PLA and ABS to PU, PC and exotic filaments.

Other features include an optimized thermal barrier, wtihout the need for water cooling, a short heating zone within the extra long nozzle for short heating times, reduced feeding friction for soft and brittle materials (such as flexible filaments), and shorter retraction times for improved speed.  As a fully assembled component, the 1730 Full Metal Hotend has been designed to fit a verity of 3D printers, with mounts and adapters made available for printers with the Greg’s Wade Extruder, Delta architectures, GRRF from German Reprap, and machines with a J-Head or E3D hotend. 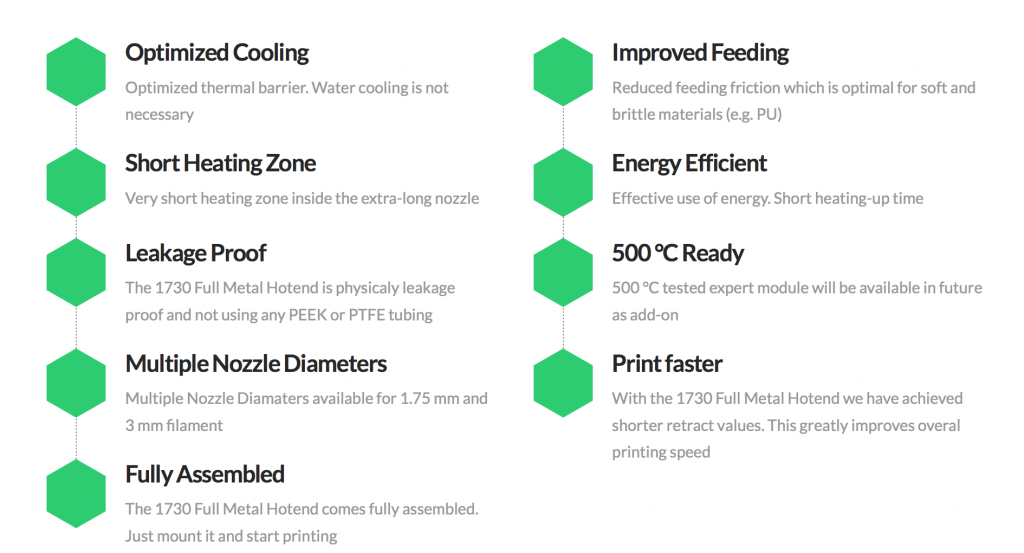 From interviewing Kai, I learned that he does a lot of experimentation both at home and in local facilities, and often has his own equipment for creating new materials. He says in the 1730 Full Metal Hotend press release, “Over the last 5 years, I have developed my own hotends for testing my filament creations. I also use and test with full metal Hotends available on the market but I often need to do extensive adjustments on them to overcome thermal issues. By this the idea came up to solve these thermal problems (PLA blockage etc..) in finding a new setup. Together with the team of ReprapUniverse we have built prototypes. Intensive testings and re-adjustments over the past months have resulted in fully functional prototypes which have successfully passed the BETA phase. The 1730 has truly surpassed my initial expectations. It has all the potential on setting new standards as a consumer-friendly hotend.” 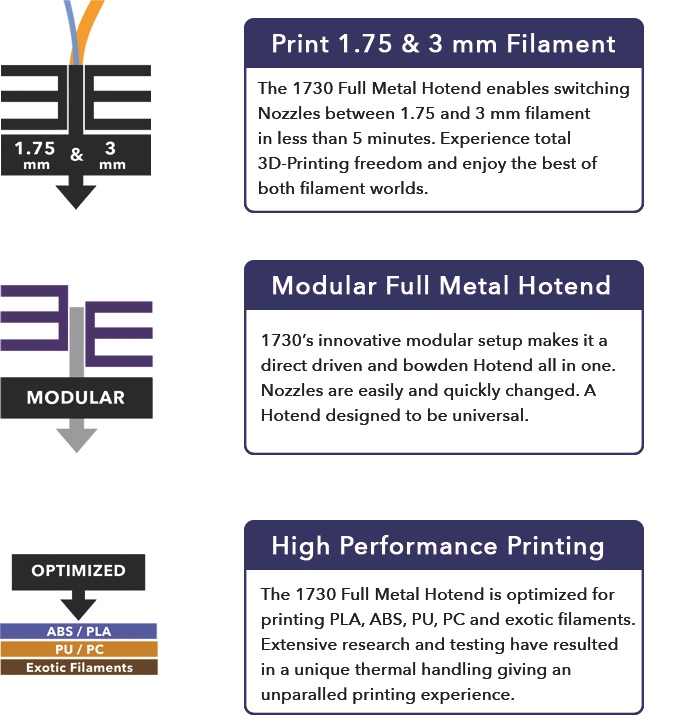 The 1730 Full Metal Hotend sounds as though it could be an ideal part for desktop FDM machines, once it is released.  To bring it to market, Kai and RepRapUniverse will be hitting Kickstarter in mid-January, as which point, may all of your filament feeding prayers be answered.

Update 1/26/16: Welp, it’s mid-January and, as promised the 1730 Full Metal Hotend is now on Kickstarter, where Kai Parthy and RepRapUniverse are seeking a humble ~$16K to get this powerful hotend off the ground.

The hotend is made up of a heatsink, heatblock, filament nozzle(s), thermistor, axial fan, cartridge heater (12V or 24V), groove mount plate or round mount. These two mounting options, for the Greg’s Wade Extruder and for J-Head extruders, are shipped with every 1730 Full Metal Hotend, but more mounting options will be produced in the future. While the 44mm x 34mm hotend will only be able to reach 300 degrees Celsius at the moment, the team plans to release an expert module in the future that is capable of reaching up to 500 degrees.

With a shipping goal of March 2016, you’ll need to fork over $139 to get your hands on their new hotend, a decent price for the ability to 3D print a wide variety of materials in the two standard filament sizes. Given Parthy’s experience with extruding fancy filaments, I’d say that, when you do get your hands on the 1730 Full Metal Hotend, you’ll probably be a pretty happy customer.