3D Systems says it is devoted to the “democratization” of 3D printers and to that end, Staples, the US and global office supply chain behemoth has begun selling 3D Systems’ Cube printer on it’s site, staples.com, for $1,299.

But in a first for any major US retailer, Staples will also be selling the Cube 3D printer in bricks and mortar stores from the end of June onwards. The Cube will be available at a select number of retail locations to walk in and pick up for the exact same price of $1,299. Of course, 3D printers have been available direct from the manufacturers, hobbyist sites and specialist resellers for a while. Notable are the Makerbot retail store in New York and the iMaker store in London. But 3D Sytems’ foray into the consumer realm with Staples is the first true public offering by a 3D printer manufacturer into mainstream retail and could be the catalyst to really drive sales in what is still to date a fairly niche market. 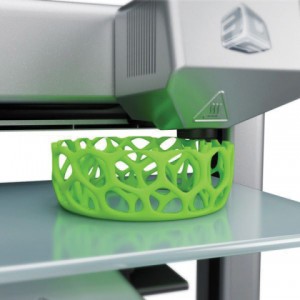 Though a first for general retail, Staples has already announced a bureau style 3D printing service — ‘Staples Easy 3D’  — to be made available at a few locations using Mcor’s Iris printers. 3D printing appears to be part of a much larger project; in fact, there are plans to bring the devices to select European stores as well.

The 3D Systems’ Cube is sold as a plug and play 3D printer and is compatible with Mac or Windows. It has a print area of 5.5” x 5.5” x 5.5”, can print in  in 16 different colours, and it comes packaged with 25 free design templates to get beginners up and running fast. It is wifi enabled and can print in ABS or PLA plastics.

Validating 3D Systems’ mission to, ”cover all ends of the spectrum – from manufacturing lines to consumers’ homes.” This may be the mainstream break that 3D printer manufacturers have been waiting for.