Quarterly financial announcements can be confusing.  There are a lot of numbers and jargon, and analysts sometimes widely disagree on what it all means.

3D Systems (DDD) released quarterly earnings this week, and the market reacted favorably.  We’ve read the release and sat in on the earnings call, and here’s our take on what it all means.

The earnings report, and subsequent response of the market, can be summed up in one sentence from CEO Avi Reichental:

Basically, DDD made more money this quarter than it ever has.  They attribute the growth to two things. First, they earned much more money from the sale of 3D printers (and related products life software and scanners).  Second, they experienced respectable “organic growth,” a term that refers to business growth that is not related to mergers and acquisitions.  They grew because they sold more printers, materials and services, rather than by buying growth through the acquisition of other companies (like, for example, Geomagic).

3D Systems tracks revenues across three major categories:  printers (and software), materials and services.  While all areas experienced growth, the sale of new 3D printers was the largest contributor to the 31% revenue growth.  Company representatives spoke about the 3D printer sales growth as a bellwether.  The more printers that 3D Systems sells, the more materials and services it can sell to support those printers.  Many analysts have questioned whether or not 3D Systems can maintain its recent record of growth (see the recent Citron report), and this metric is evidence that it can. 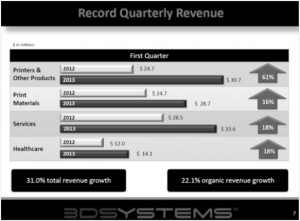 Reichental spoke with excitement about new product sales.  Revenues from new products, which they define as those that have been around for less than 3 years, increased 60%.  He argued that this showed that the company was making responsible investments in research and development, another common analyst critique.  DDD released four new products during the 1st quarter, including the Cube and Cube X personal 3D printers that were announced at CES.  Reichental reported, somewhat cryptically, that the desktop printers had received a “favorable marketplace reception” and that “sales are at the top end of our expectation.”

The healthcare sector, a market segment that 3D Systems views as its most promising, experienced only moderate growth of 18%.  This was less than many expected, given the sector’s importance to the company’s overall plans.  Representatives explained that the moderation could be attributed to the “timing” of purchases, and that more impressive growth would resume over the course of the year.

The 22.1% organic growth that DDD reported is worth noting.  The Citron report claimed that at least some of 3D Systems impressive growth could be attributed to creative accounting around recent acquisitions (of which there have been over 30).  Organic growth excludes this type of revenue, so representatives were sure to display this information prominently.   The acquisition game shows no signs of abating, however.  On Wednesday, the company announced that they had acquired Rapid Product Development Group (RPDG), a provider of on-demand additive and traditional manufacturing services.

Investors were encouraged by the quarterly report.  The stock is up about 10% since earnings were announced earlier this week.

If you really want to get into the financial weeds on this, you can find a link to the 1st quarter conference call and webcast here.

James Coleman is a 3D printing enthusiast, and the founder of MakerStash.com, a supplier of 3d printing filaments and other maker supplies.