3D Systems (NYSE:DDD) has reported earnings for the quarter ending 31st March 2017. Revenue has increased in comparison to the same period for 2016.

3D Systems discloses revenue as either attributable to products or services, and do not make public the detailed figures necessary to understand precisely how much revenue was generated by areas such as the number of 3D printer sales, the amount earned from metal 3D printing or the figures on sales of a particular material.

Printer sale units increased when compared to the prior year quarter.

In coming quarters software is expected to be a revenue driver and the ongoing investments in print on demand services will improve revenues.

“Focusing on software and workflow,” will be the enabling foundations for the future growth of 3D Systems said VJ on today’s call.

A focus on costs

A major message from CEO Vyomesh Joshi (VJ) has been a focus on costs. The 2.54% increase in year-on-year revenue was accompanied by only a 1.6% increase in gross costs. While operating costs fell from $94.2 million in March last year, to $89.2 million. This is 5.32% decrease. The savings were achieved by, “balancing investments with cost savings initiatives.”

“We still have work to do but we are pleased with the results,” said VJ on a call with investors today.

Highlights during the quarter

3D Systems note several highlights of the past 3 months. These are the ongoing, shift from prototyping to production with, “solutions that deliver improved productivity, repeatability, durability and total cost of operations.”

After the traditional remarks around the financial results we dealt with, the call with investors and analysts turned to the Figure 4 platform. The Figure 4 engine is designed to grow and scale with customers as they grow.

The first shipment of a Figure 4 additive manufacturing platform was announced by 3D Systems in March. The company has plans to tailor the platform for the dental market, and coupled with the NextDent material portfolio this may prove a lucrative revenue stream.

Figure 4 is billed for it’s potential to, “transform production of mass customized and complex end use parts while meeting durability and repeatability requirements of production environments.”

3D Systems are expecting Figure 4 to be truly disruptive. The company point out that fewer printers required, and the system gives better throughput. Furthermore, Figure 4 has “lower direct labor costs and higher materials utilization” which both “contribute to lower total cost of operations.”

VJ explained that while dental customers might only require 1 Figure 4 engine, 3D Systems has installed Figure 4 configurations of up to 16 engine modules. No comment was made on the pricing of the Figure 4 platform.

Speculation on the Figure 4 customer

With 3D Systems acquiring NextDent, and more specifically the 12 dental 3D printing materials, speculation around the identity of the Figure 4 customer, know to be a fortune 500 company, is rife. Align Technology Inc. (NASDAQ: ALGN) might fit the bill, something 3D Systems would not comment on during today’s call.

Interestingly, while many commentators continue to sound the horns for the ability of 3D printing to decentralise manufacturing the reverse may actually be true. In the case of Align and their Invisalign clear aligners the dental care company has over 2.6 million patients per year and has sold more than 149 million unique aligners.

Align, together with the manufacture of hearing aids, are frequently held up as a case study of the disruptive potential of 3D printing. Invisalign has over 1/3 of the Annual Worldwide Adult Orthodontic Case Starts according to the company.

As we reported earlier this year, the Swiss Dental company Straumann are looking to collaborate with a 3D printing company.

Deferred revenue increased by $11.5 million during the quarter. An analyst questioning this figure on the call was told the increase is not considered a sizeable figure.

The balance sheet of company does not appear to contain any unexpected movements.

As previously reported, 3D Systems are targeting the defense and automotive markets with new board appointments during the quarter. Healthcare is the initial focus, and success in this sector is believed to be repeatable in these other key markets. 3D Printing Industry will bring you further updates on developments in these markets soon.

3D Systems were nominated by our readers for several 3D Printing Industry Awards, you can let us know which companies should take home the trophies from our event later this month by voting here.

Also, don’t forget to subscribe to our newsletter and follow our active social media accounts for all the latest 3D Printing Industry news. 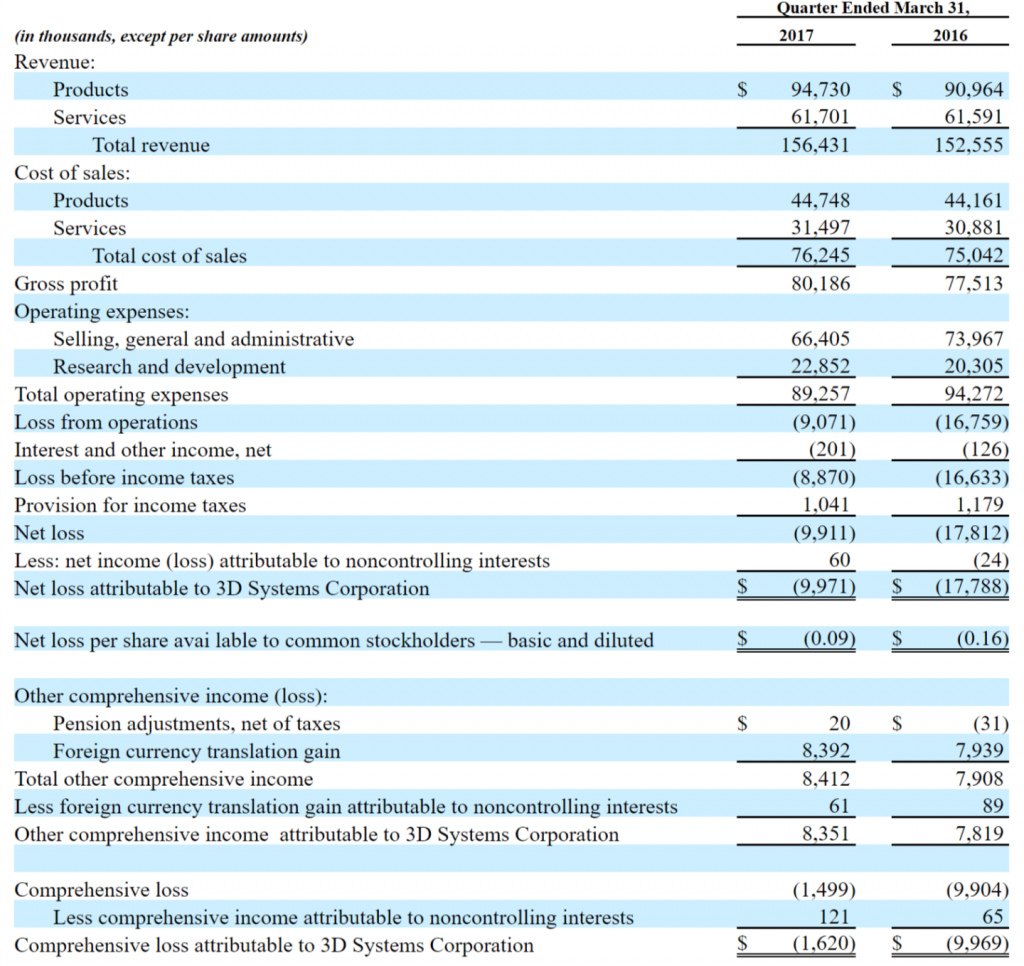