3D Systems has booked another disappointing quarter. The company believes they are “on the right track” and are “putting the appropriate structure in place to drive future sustainable growth” – a concern is whether the market will permit the time necessary to accomplish this.

However, by withdrawing financial guidance “for the time being” the market’s response of a punitive 19% equity hit was unsurprising.

A recurring theme on a call with investors and analysts was the ongoing operational and organizational improvements. 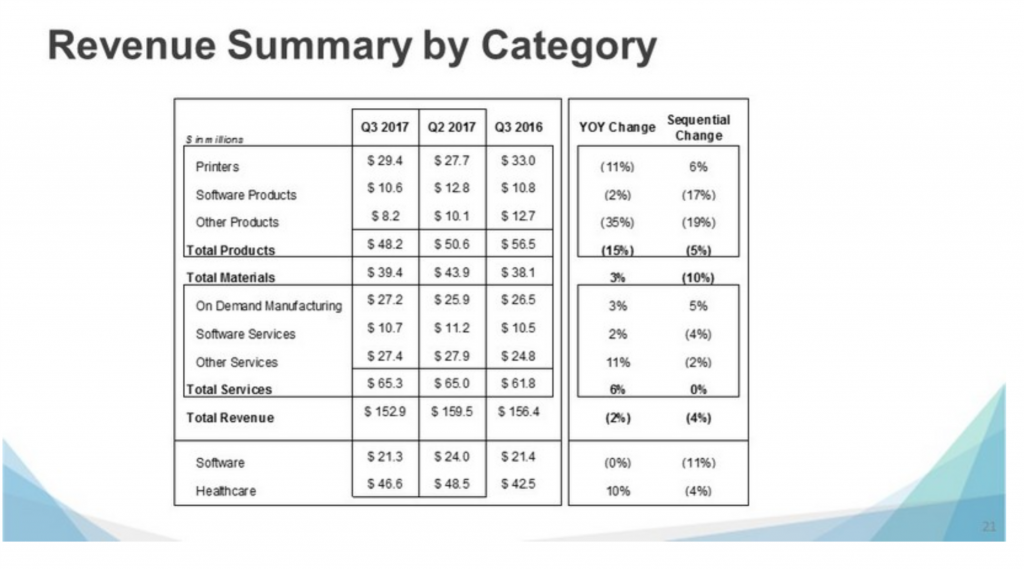 Beleaguered by concerns of channel partners and a perceived weakness in metal 3D printing systems, advantages in healthcare are a long tail win yet to be fully recognised by the market. Resolving “legacy issues as quickly as possible” is a stand-out message from today’s call.

Expertise in navigation of regulatory hurdles is advantageous for healthcare, where center’s of excellence such as Colorado could be translated into other strict regulatory verticals such as aerospace in the future. However, the once vocal company has been relatively silent on aerospace activity.

With U.S. rival Stratasys publicly rolling out new tech demonstrators and even soft pedalling recent IP such as EPSD, speculation over 3D Systems as a 2D takeover target remains valid.

Behind these headline figures, healthcare continued a double digit ascent, clocking in at $47M. This was countered by an 11% decline in printer revenue, hitting $29M.

Investing for the long-term

In Europe, additive manufacturing powerhouses such as EOS remain confident in their independence, declining suitors with deep pockets. Yet as North America warms to the prospect of home grown talent the inventor of SLA has not seen the benefits bestowed on other enterprises.

Figure 4 was the most recent long-term  horizon play by 3D Systems. And as product revenues decline we should not write off the long term vision. Debt free and with money in the bank, 3D Systems does not have flames at their heels. However, as non-traditional enterprises move into AM they may suffer from the ongoing talent war.

Investors were told that Figure 4 will move from “approximately $25,000 to over $1 million” in the coming months.

A next generation metals platform and dental specific solutions for dental labs are also coming. Furthermore, entry into “low end with a highly production, desktop, industrial printer” is on the way.

The promise of the “new” in technology is undoubtedly alluring. The 3D printing industry has not lacked for the rebranding, reinventing and remarketing of  additive technologies this year. While it may be tempting for analysts to write off 3D Systems, the company has enviable assets sufficient to ride out any short term storm. Earlier acquisitions and in-house expertise may also prove to deliver the message needed to silence critics.