I could probably write a long essay about his touching yet tragic short film and how it represents the cyclical nature of life and the inevitability of loss and change, but I think it’s better to allow Mr. Bothman’s film to speak for itself:

The California Institute of the Arts, or CalArts, was the first art school in the country to grant bachelor and master degrees in the fine arts, and in fact the school even boasts 3DPI’s own senior writer, Mikey Molitch-Hou among its alumni. As a student of the Character Animation program Aron Bothman was required to make a film each year. So he spent nine months working on Feast of a Fallen City, handcrafting each character armature, building his highly detailed miniature sets and painstakingly lighting and filming his short one frame at a time.

The characters started out as 2D drawings that he used as a reference while sculpting a maquette of each of the characters’ faces. Once he was satisfied with his sculpt he took several pictures of the maquette and using Maya and then ZBrush he sculpted and refined his characters’ faces before converting them into STI files for 3D printing. California 3D printing company Cokreeate printed out the multiple faces in a gypsum material hardened with resin that gave the models’ faces an organic porcelain quality. 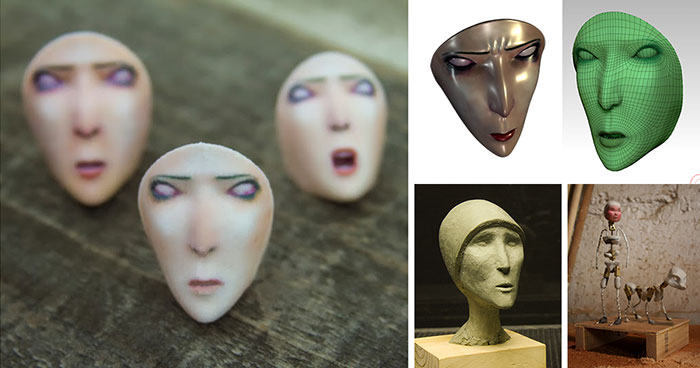 Bothman explains why he chose 3D printing to help make his short film. “3D printing is appealing for me because it allows me to take on a much more ambitious project than I might be able to otherwise, given the time and resource constraints involved in making a student film.  Also, the 3D print material has a very compelling texture, and I love lighting and photographing it.”

Bothman has also produced a short video detailing all of the highly detailed work and art disciplines involved in making his film:

You can see more of Aron Bothman’s art on his blog. You can also view his previous student film that was also created using 3D printing here.