Maybe it is because it is the first taste of real wearable technology we are going to get, maybe it is because the Oculus Rift team is an example of extremely successful and practical, forward thinking “making”: for these, and probably many other reasons, some of the items that people put the most passion for 3D printing into are virtual (and augmented) reality visors. 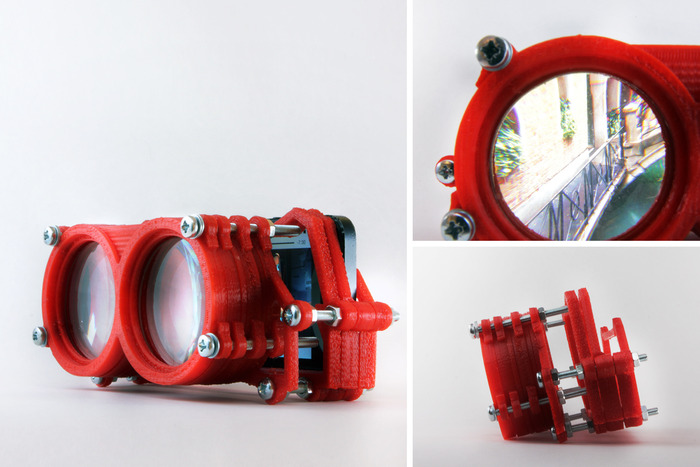 We have told you about 3D printed Google Glass clips and even about a Lego “FaBrickated” virtual reality visor, now we are going to tell you about a new Kickstarter project “Altergaze”. The idea is simple: a fully 3D printed visor that will create up to a 110° field of view at high resolution (1136 x 640 on iPhone and 1920 x 1080 on Samsung S4). It will have “head tracking” to 6 degrees of freedom and will be easy to carry around (15.8 cm x 8.2 cm x 7.2 cm).

What is perhaps even more amazing about this project, however, is the way that — if successful — it will pave the way to a new product development, design and distribution paradigm based on 3D printing and mini local factories.

A couple of years ago it was just an abstract concept. Then it became an idea. Now it is a reality, albeit in its very early stages — 3D print shops and laboratories as local, neighborhood factories. In this new cycle the idea for a new object, the Altergaze, is “crowd sourced”. If it makes it past the funding stage it will go into early production through a local 3D printer and then will move into world-wide manufacturing using local 3D printing factories.

The design is open source and can be customized. Users can also choose to pledge £30 to receive the files and print it themselves. Or £50 and assemble it themselves. Or £100 and receive it fully assembled and ready to use. A successful funding campaign will also mean the team will develop an interactive website to access, preview and modify their Altergaze.

Being closely related to mobile “App” gaming, this is a project that transcends its manufacturing and continues its lifecycle going back into the virtual arena (where it was born): Altergaze has developed tools for game developers to easily integrate Altergaze support, offering new versions of their software or adding a virtual button to turn Altergaze vision on and off.

Apart from lenses and screws, the Altergaze will be entirely 3D printed so anyone who owns a 3D printer can become an Altergaze manufacturer and distributor; rubber piece and lenses will be supplied to them. This video shows how to put it together. Looks easy enough and, many times, the simplest things are also the most disruptive ones.

How to assemble the Altergaze from Liviu Berechet Antoni on Vimeo.