3D Printing Invites You to Join the Avengers

Hasbro, Inc. (NASDAQ:HAS) is making further moves into the 3D printing sphere.  After already partnering with 3D Systems and inviting artists to create Hasbro fan art (My Little Pony, G.I. Joe, Transformers, and more) to sell on Shapeways, the toy maker has teamed up with 3DPlusMe to offer personalized 3D printing at Walmart and Sam’s Club stores across the United States. From September 19th to the 28th, customers at ten Walmart and two Sam’s Club locations will be able to 3D print their faces onto Captain America and Iron Man action figures in a program they’re calling SUPER AWESOME ME.

To coincide with Disney’s Marvel Super Hero September, fans will get a chance to participate in in-store 3D scanning, in which their faces will be rendered as strikingly realistic 3D models to be placed on Captain America or Iron Man figurines to be 3D printed at 12″ tall with an approximate price tag of $45, which is pretty affordable compared to similar personalized 3D printing services offered via Disney (Their personalized, 3D printed Star Wars collectibles began at $99.95 for a 7″ storm trooper or X-Wing pilot.)  The print can either be picked up at the store or shipped to them in the course of four weeks.

John Frascotti, chief marketing officer for Hasbro, Inc., said of the SUPER AWESOME ME initiative, “With 3D printing, we’re now able to provide fans of Marvel Super Heroes for the first time ever with this very unique opportunity to create a one-of-a-kind action figure featuring their own likeness. By partnering with Walmart, Disney, and 3DPlusMe, we’re delivering to consumers a totally personalized product experience.”

Isabella Lahoud, vice president of licensing for Marvel at Disney Consumer Products, added “Our Marvel Super Hero September campaign encourages consumers to Power Up Like a Super Hero and through the innovation of 3D printing, SUPER AWESOME ME allows them to become one of two popular Marvel Super Heroes. We are thrilled to team with Hasbro along with 3DPlusMe to offer this cutting edge and exclusive opportunity to fans of all ages.” 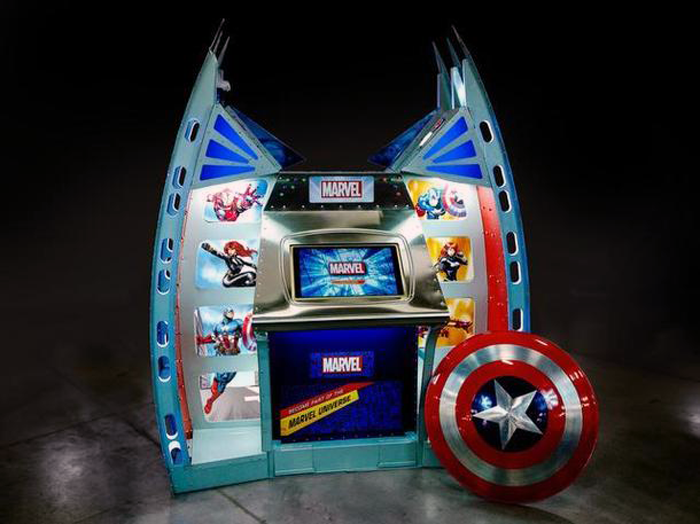 3DPlusMe previously ran a similar pilot program in one Sam’s Club store in Texas this July.  It looks like the program was a success, as their Marvel 3D printing station will now branch out to Walmart and Sam’s Club stores in New York, Los Angeles, Chicago, Houston, and more starting today. The start-up’s CEO, Cydni Tetro relayed, “By joining forces with high-profile retail partners and brands, such as Hasbro and Walmart, we are delivering a story-driven experience to fans on an unprecedented scale. Our mobile personalization platform for 3D printing is the first of its kind. Helping consumers become popular characters is not only a compelling event for fans, but a powerful retail opportunity.”

If you’re one of the folks who will be taking on the great responsibility of becoming a 3D printed super hero with SUPER AWESOME ME, you can share your experience with the hashtag #MarvelSuperHeroSept. For a full list of stores (also in Florida, Maryland, Arizona and other states) participating in the fun, visit the SUPER HERO ME website.