Most of us can simply look at old photos for a wave of nostalgia, but the visually impaired and the blind simply have to live in the moment. That is until a couple in Italy applied a little lateral thinking and decided that 3D printing could put them in touch with their past.

She only wanted to see his face

It started with a simple concept, Miki wanted to see her new fiance’s face when he was a small boy. Her senses allow her to build a mental image of anybody she can touch, but most women want to know what their boyfriend looked like as a child.

This would be simple enough, except she lost her sight at a young age. Domenico had an idea, though, and he set about making the perfect engagement present.

Converting an old photo is no easy task

He took a picture to local Como artist and digital sculptor Simone Rasetti. He asked him to turn a photo of the then 5-month-old child into a digital representation. That is easier said than done.

The 40-year-old photo lacked the resolution of a modern digital file, so the artist had to make use of the ZBrush software suite to effectively build a virtual sculpture of the younger Domenico from the basic information on the paper picture.

It’s a powerful concept and one that we simply did not consider. The visually impaired are locked in the moment, though. They have to touch, smell or hear something to truly appreciate it. Now, we can create models that put them in touch with their past.

Now when Domenico is out of town on business, Miki can take out the model and it gives her the same solace as a photo. It’s a beautiful concept, with a much wider application. 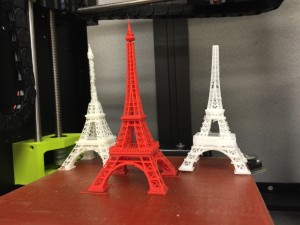 It works for buildings too

A visually impaired person might never get to visit a famous monument. Even if they can then it is too much to analyse with their hands, it’s just too big. To really appreciate a building we need to stand further back and look at it from a distance. We need a sense of perspective.

A blind person’s perspective can come from a scaled down model. They could hold the Eifel Tower in their hands, or the Statue of Liberty, and really get a feel for some of the wonders this world has to offer.

Models can show the whole world to the blind

Even the basics, like a car, or a tree, can be easier to understand with a small model. So this heart warming story about a couple in love has a wider application. 3D printing can help the blind to see the world in their own unique way.

It’s a simple way that we can really change lives for the better. It’s something we should embrace.