The news is that Diverse Maniere: Piranesi, Fantasy and Excess, an exhibit on Giovanni Battista Piranesi’s work, can now be visited in London, at the Sir John Soane’s Museum, until May 31st. The Italian artist’s creativity is mostly related to incredibly beautiful – though often imaginary – paintings and etchings inspired by extraordinary archaeological works of art. Now these paintings have been recreated as incredibly accurate 3D models and 3D printed.

Giovanni Battista Piranesi lived in Italy during the middle of the XVIII century and is famous for his etchings of Rome and for the Carceri d’invenzione, a fictitious representation of “Escherseque” underground jails, which represented a prison for the mind. To Piranesi, creativity was a way to escape this prison, a concept that easily relates to the recent wave of creativity spawned by 3D printing technologies.

Like many modern 3D print artists, Piranesi was an architect but also a sculptor and a designer. He often presented himself as an expert of ancient Rome and recreated roman artifacts in his drawings just by using his imagination. In London he met Sir John Soane, who later became a champion of Piranesi’s style. The current exhibit in London is the result of a partnership between the Soane Museum and Spanish company Factum Arte, which has been extremely proactive in 3D scanning and reproducing amazing works of archeological art throughout the world.

In this case the challenge was that the Italian artist’s creativity had remained mostly confined to 2D sketches, drawings and paintings. Now they being brought into physical reality but are they to be considered real works of art or merely replications of designs based on fictional archeological finds? 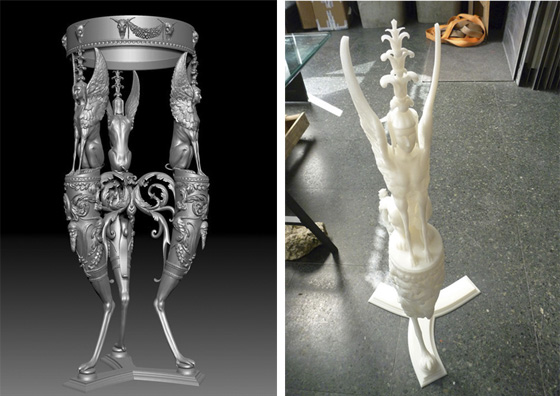 What is undeniable is that the result is extremely pleasing to the eye and inspiring to the mind, as was Piranesi’s original work, fictional or non-fictional. Factum Arte created both a digital 3D model of the Carceri d’invenzione, of which you can see in the video below, and proceeded to 3D sculpt and 3D print items from his other works. Those include the particularly famous Fireplace (the modelling process is also described in the video) as well as a Helix Tripod, a Roman vase, a Chair and an Isis Tripod, among many others.

Piranesi’s etchings were transformed into 3D models and .stl files by voxelstudios in Madrid, then they were printed by SLA through Materialise technology in Belgium. Most of the resin prototypes were then cast in bronze. London was not the first time the items were exhibited. Piranesi’s 3D work was shown during Venezia’s Biennale and later at an event in Madrid. The Guardian, however, gave the exhibit four stars. Apparently it does not matter when something is shown, when it was made or who made it find artistic value, beauty and inspiration within it.

Piranesi, 3D modelling of a fireplace from factum-arte on Vimeo.