The life-saving applications of 3D printing are, now, no longer surprising.  In fact, 3D printing patient-specific models is now becoming regular practice for surgical preparation.  Now, however, a team of Michigan doctors has used the technology to help diagnose a medical concern before the patient was even born.

Reported in Pediatrics, Michigan doctors took note of a large mass on the face of a fetus belonging to a 22-year-old woman in the 30th week of her pregnancy.  With a traditional MRI scan, the team was unable to determine the exact nature of the mass. Concerned that the mass would block the baby’s airway at birth, the doctors relied on 3D printing to further diagnose the issue, in the event that might need to prepare for intubation upon delivery.

Using a specialized MRI, they were then able to translate the scan data into a 3D printable model, with which they were able to predict that the baby had a cleft lip and palate deformity that would not cause any airway blockage.  The authors, Dr. Kyle K. VanKoevering, et al., write in the study, titled “Antenatal Three-Dimensional Printing of Aberrant Facial Anatomy”, “These findings confirmed that an EXIT procedure was not indicated. With the results of the 3D-printed models, the decision was made to proceed with a scheduled cesarean delivery. The neonate was successfully delivered without complication and was able to breathe spontaneously without intervention.” 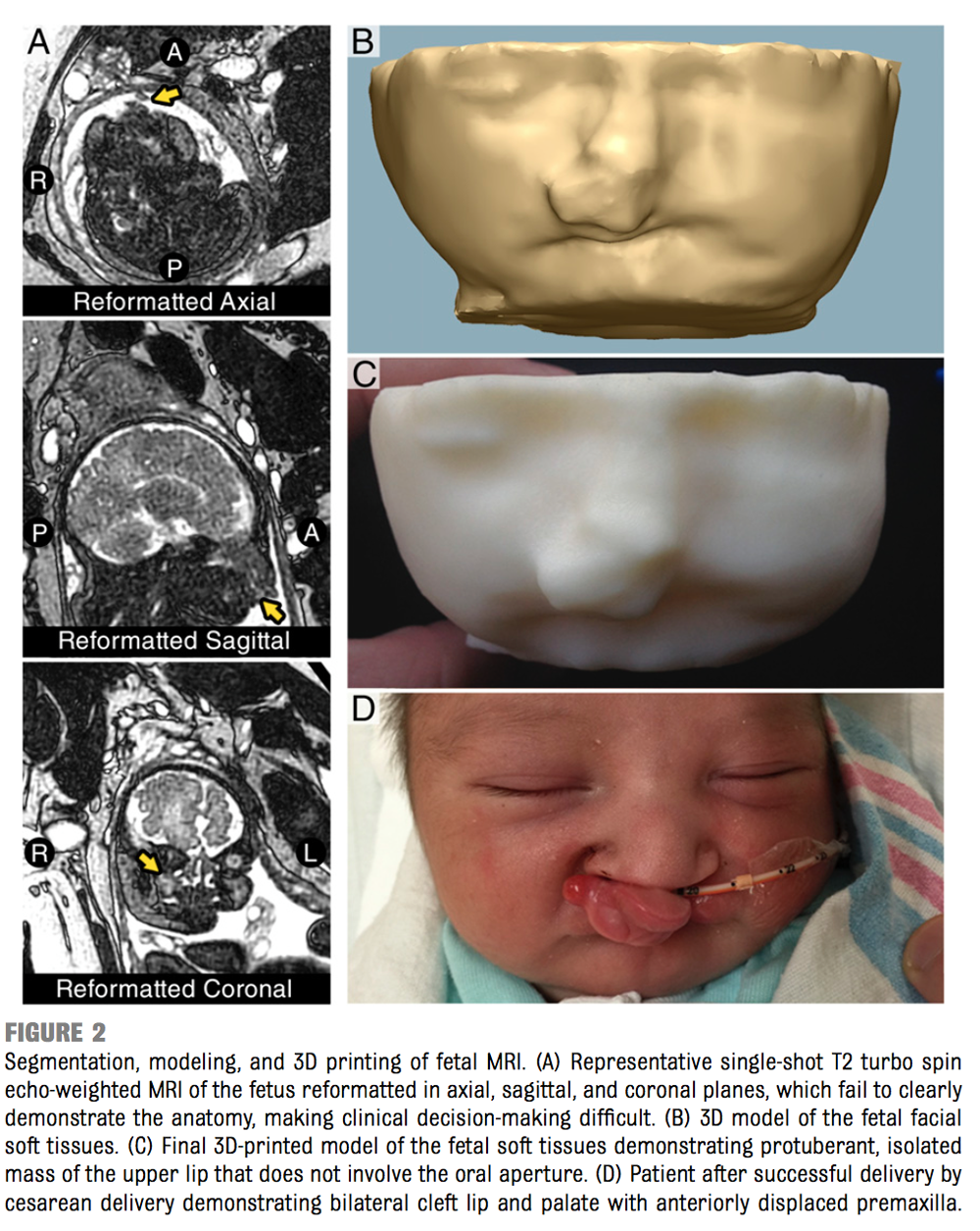 As a result, the baby was born without any issue.  With only a day in the ICU, the baby was then discharged from the hospital, with plans to repair the cleft lip three or four months down the road, followed by a repair of the cleft palate in nine months to a year.  Hailing the use of a 3D printed model for pre-natal prep, the authors explain the limits of even the most advanced MRIs. “Recent advances in 3D printing in medicine have hinged on the improvements in resolution of traditional imaging modalities such as MRI. Traditionally, cross-sectional imaging tools such as computed tomography and MRI are visualized in a series of 2D planar images.” write the Michigan team. “However, for the clinician to visualize the 3D anatomic relationships, they must mentally reconstruct the 2D planar images into a 3D picture. For our team of clinicians, the 2D images were insufficient in allowing the team to fully appreciate the anatomy and could not depict whether airway obstruction would be present. However, the 3D models provided.”

They continue, pointing out how the model also removed unneeded raw data from the visualization, “Although 3D printing does not provide new data, it filters and processes the raw data matrix from the MRI in a way that enables improved visualization and clinical decision-making for the clinician. Additionally, the hands-on experience provided by the 3D printed model allowed the team to plan potential interventions (ie, intubation with a specific laryngoscope) in a fashion that would not have been possible with purely digital models. This experience allowed the team to proceed without a planned EXIT procedure having more confidence in the anatomy and potential interventions necessary.”

Just as 3D printed pre-surgical models are becoming increasingly used in the medical field, it’s possible that, with the Michigan team providing a first, that they’ll even be used for patients in the womb, removing both medical complexities and parental anxieties from the delivery of new born lives.