The ARC Centre of Excellence for Electromaterials Science (ACES) is working to push the boundaries of the possible with 3D printing technologies to forge innovative new medical solutions, jewellery, even original and facsimile musical instruments as part of it’s mission. The University of Wollongong’s Global Challenges Program has called on the ARC Centre to 3D print a block-flute from polymers that both duplicate the timbre of its concert equivalent and produce new micro-tonal musical scales with the instrument.

3D printing seems to have come a long way since an eye catching cover on The Economist back at the start of 2011 ran with the headline: ‘Print Me A Stradivarius.’ Whilst the promise of a new way of making musical instruments is not unique; the premise of making quality musical instruments, with their intricacies  of resonance accurate, by printing them in layers, is growing, as demonstrated by Olaf Diegel’s work with 3D printing instruments, most recently with a saxophone. Mike also touched on this in his recent article on the convergence of music with 3D printing. 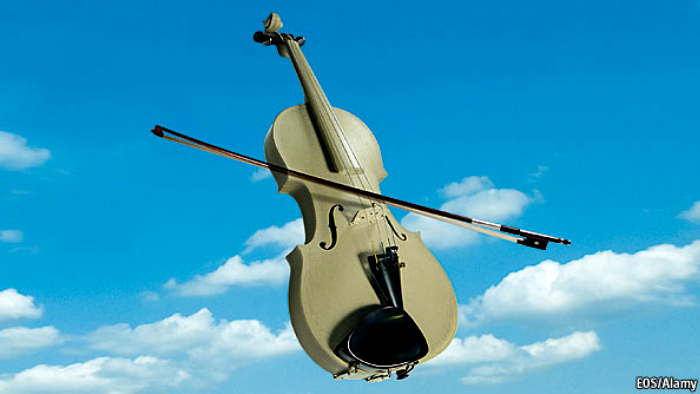 Printing a high quality musical instrument is towards the precision engineering end of the spectrum of 3D printing production applications. Whilst prosumer home 3D printers will output a perfectly reasonable pocket ocarina, this is far away from techniques used to print a concert violin — or a flute. The famed violin in question was 3D printed by Germany based 3D printing company EOS, using an industrial polymer normally used for high-temperature functions in medical applications.
As EOS told Wired.co.uk at the time: “The violin was a technology exercise. We wanted to test what we can achieve with our technology, which… is ideally suited for complex structures. This is why we chose a complex musical instrument which normally is being made in a very traditional way and with a traditional material―wood.”

Now, ACES is exploring the potential for 3D printing to create custom-designed flutes that can play micro-tonal scales. Research Fellow and ANFF Additive Fabrication Manager Dr Stephen Beirne design and 3D printed the flute, its intricate mouth piece in a continuous 3D printing process. The flute was unveiled in Australia recently, at the Darwin Festival, where Dr Terumi Narushima who is a UOW collaborator and microtonal tuning systems specialist, played the 3D printed flute to a live audience.

According to Dr Narushima: “The flute attracted a lot of attention because it looks different from your standard block flute owing to its milky-jade green colour. People were curious to know more about the 3D printing process we used to make it and were impressed with its sound.”

The team at the University of Wollongong believes that there is enough potential in this project to challenge traditional methods of manufacturing musical instruments: personalisation being one of the main boons. The musician will be able to specify the tuning of their instrument to better suit their needs and then print-on-demand to achieve unique sounds.

The team behind the project also foresees the potential to recreate rare and antique instruments – from Palaeolithic Pipes to Baroque Bassoon – for an authentic sounding replicated facsimile.

ACES Research Fellow and ANFF Additive Fabrication Manager Stephen Beirne produced the flute – both the finely honed mouth piece and carefully calculated main body – in one continuous 3D printing process. Dr. Beirne said: “It’s a tricky business getting a piece of plastic to sound like a concert instrument but after much modelling and a few prototypes we achieved just that!”

Team Researcher Terumi Narushima said that the project combines the nascent field of micro-tonal music with the ’emerging technology’ of 3D printing to create instruments that are simply out of the range of scope of feasible within standard manufacturing.

Dr Narushima said: “The project takes a different attitude to music-making. It’s about not taking the status quo for granted. What kind of new music and new instruments can we create? Can we create rare and customised instruments and help musicians achieve unique sounds?”

“Now that we know it is possible to create an instrument using the 3D printer our next big step is to design a flute where we can control the pitches we get with a view to creating new types of music. We have learned so much from being part of the project, in terms of the precision needed to design and fabricate an instrument, and I think this comes down to the fact that we’ve been able to find a common language between artists and engineers.”

The 3D printed block flute using 3D printing techniques is only the start for the team who are to develop a transverse flute that can be played in non-standard tunings.