A group of toy devs have a created an interesting Kickstarter project, which suits the current phase of consumer-level 3D printing market spot on. Even though several companies claim to already have what it takes to produce a true plug&play type of 3D printer, the reality is still quite far from it – with many experiencing difficulties similar to those covered in Moheeb Zara’s excellent Replicator 2 overview.

The Kickstarter project at hand – called simply the 3D Printer Test Kit – from 3DKitbash aims to help the user clear some of that initial struggle with calibration, other settings and the hardware related limitations faster and easier than before. This is done by creating a set of CAD files – called Tolerance Chips – which are specifically designed to test all of the relevant 3D printer metrics, such as the smallest scale for sharp details, narrow gap size limits, ridge durability, text readability and so forth – take a look at the drawn images and the actual counterparts – printed with two different machines – below to get a better understanding before watching the pitch video featuring all eight tolerance chips and other details. 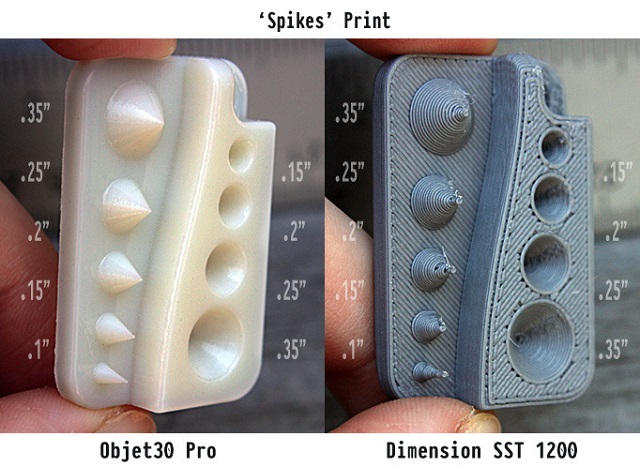 Of course, to an end user with no prior knowledge – or just no particular ‘deep’ interest – of the tech, this test kit doesn’t necessarily bring much additional comfort. This is due to the fact that even by using this test kit, the novice user could never really be 100% sure if the visible variations in the 3D printed outcome would be due to their own incompetence with settings, software or hardware related or a combination of all these factors. But to a more experienced maker, such files could be worthwhile and save personal resources i.e. nerves, time and (filament) money – whenever using a new machine.

Also positively for once, this Kickstarter campaign isn’t reaching for the high six-figure pledge scale, but have set their goal to a modest $1,500, which is already a $50 short of completion with two weeks to go. If you want to get involved, $30 is the lowest that will get you your very own test kit files.