Evolution. It’s played a central conceptual and practical role in the RepRap project that has spawned much of the new wave of prosumer desktop 3D printers. Adrian Bowyer’s 2005-incepted project was booted-up with an evolutionary process of generational progress and natural selection as the foundation. Human reason is the basis of a natural selection process that augments, hones and refines new 3D printers in the RepRap model — self replicating machines: evolved by permutations of the possible, adapted by the practical. Now, the RepRap printer model has been used in a 3D printed machine that enacts a fully-automated chemical evolutionary process that holds the premise of discovering the missing link between the complex-data-coded first living cells and their chemical precursers. Evolving machines mechanising evolution.

Using a RepRap 3D printer adapted using parts printed by a RepRap 3D printer, a team of chemists led by Professor Lee Cronin at Glasgow University, Scotland, UK, have successfully created a machine that automates evolutionary processes for the natural selection of behavioural chemical ‘synthetic cells’. The cells are kept alive – the definition of life being intrinsic here – by the machine, and processed in an artificial evolutionary process: at the level of chemicals, without DNA. The robotic machine is fully automated, it sets up the experiment, conducts the experiment, collects the results from the experiment, and even cleans itself in preparation between generational stages of the experiment. The machine, process, and early results are published in an open access paper at Nature Communications.

The extruder of the 3D printer was replaced with a liquid handling carriage, the software adapted, and a module approach to the machine’s design taken, so that it can be used for other experimental research. The system uses four chemicals: dodecane, pentanol, octanol and DEP — suspended in alkaline solution. 225 unique combinations were possible. In a number of experiments evolutionary fitness based on movement, division and vibration was viewed over 21 cycles of fitness fincrease. In the latter experiment an evolutionary algorithm was used to analyse some 17,000,000 permutations of the chemical reactions. Given the amount of variables the robotisation of the process has clear benefits, greatly speeding the process and reducing labour input via automation.

The various mixture droplets of the oily chemicals in a water solution showed a range of fascinating behaviours, as per the images below. From connection and division of the droplets to intricate motion patterns that are described by analogous, almost poetic names such as ‘stardust’ and ‘galaxies.’ These are caused by the sensitive physical properties of the droplet such as aqueous solubility, surface tension, viscosity and density. The behaviours are caused by internal forces with the droplets, phase separation of the different organic components, and their solubility. 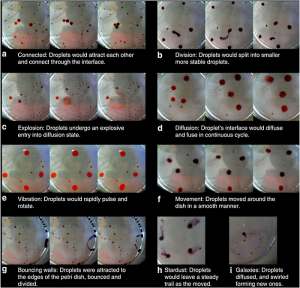 The results of the experiment show a range of behaviours in the compounds.

Professor Cronin said: “This is the first time that an evolvable chemical system has existed outside of biology. Biological evolution has given rise to enormously complex and sophisticated forms of life, and our robot-driven form of evolution could have the potential to do something similar for chemical systems. This initial phase of research has shown that the system we’ve designed is capable of facilitating an evolutionary process, so we could in the future create models to perform specific tasks, such as splitting, then seeking out other droplets and fusing with them. We’re also keen to explore in future experiments how the emergence of unexpected features, functions and behaviours might be selected for. In recent years, we’ve learned a great deal about the process of biological evolution through computer simulations. However, this research provides the possibility of new ways of looking at the origins of life as well as creating new simple chemical life forms.”

It’s a few months now since Pope Francis reminded people of Christian faith, such as myself, that religion and science are far from at odds, indeed that the Church fully recognises biological evolution (and the origins of the universe in the post-singularity ‘big bang’). What are the ethical implications of mankind creating life? What are the moral questions that may be posed by the increasing ability of man to manipulate the processes that bring life about? Science will surely not be exempt from the need for ethical input and moral input from religions and humanists?

“The Big Bang, which today we hold to be the origin of the world, does not contradict the intervention of the divine creator but, rather, requires it… Evolution in nature is not inconsistent with the notion of creation, because evolution requires the creation of beings that evolve.” — Pope Francis