In a society dominated by an abled majority, in which disability is defined as a deviation from a socially defined norm, it can be difficult to maneuver and operate as a differently abled individual.  Sidewalk curbs, entryways, and buildings as a whole, for instance, are not necessarily tailored to accommodate those confined to wheelchairs.  3D printing, however, is a technology meant to tailor the world to the individual.  On the one hand, the customizability that 3D printing offers could mean shoes perfectly fitted to the feet of the wearer.  On the other, it means modifying an abilist society to meet the needs of the differently abled.  We’ve already seen one 3D printer owner 3D print his own mini wheelchair ramps for sidewalk accessibility.  Caleb Kraft, Community Editor at Make, has published a new story about a mass manufactured item that does not consider the differently abled: video game controllers.

Caleb writes, “One of my many hobbies is modifying game controllers for people with special physical needs. It could be a missing finger, a missing arm, muscular dystrophy, etc. I’m no mega genius with incredible engineering skills, I’m just a normal guy with a soldering iron (and a 3d printer). Since I can’t modify as many as are really needed, I try to publish the plans and share the information whenever possible. Hopefully others can reproduce these things for people near them.” His most recent project involves 3D printing mods for an Xbox One controller for a friend of his named Jay, whose muscular dystrophy means that Jay has to use the controller with his hands at a certain angle.

Because Jay has some difficulty pressing the thumbsticks to make them click, Caleb has already created a button that takes care of that feature.  It’s a somewhat involved process, as it involves disassembling the controller, soldering new buttons, and 3D printing and attaching a new plastic component.  The 3D printing itself is actually the least complicated part of adding a new button that takes the place of the thumbstick clicker.

After resolving this issue for Jay, Caleb moved onto the trigger.  Though Jay described how his hand fell on the controller’s trigger, the two wanted to develop a 3D printable piece that could help a wide variety of people, leading the two of them to iterate a number of options.

Using a Lulzbot donated to thecontrollerproject.com and plenty of support from its manufacturer and the 3D printing community, Caleb and Jay were able to 3D print an adequate trigger modification. In order to prevent it from slipping off of the slick surface of the mass manufactured button, Caleb cut some ridges into the original trigger with a dremmel tool and used JB Weld to secure the 3D printed trigger extender in place. 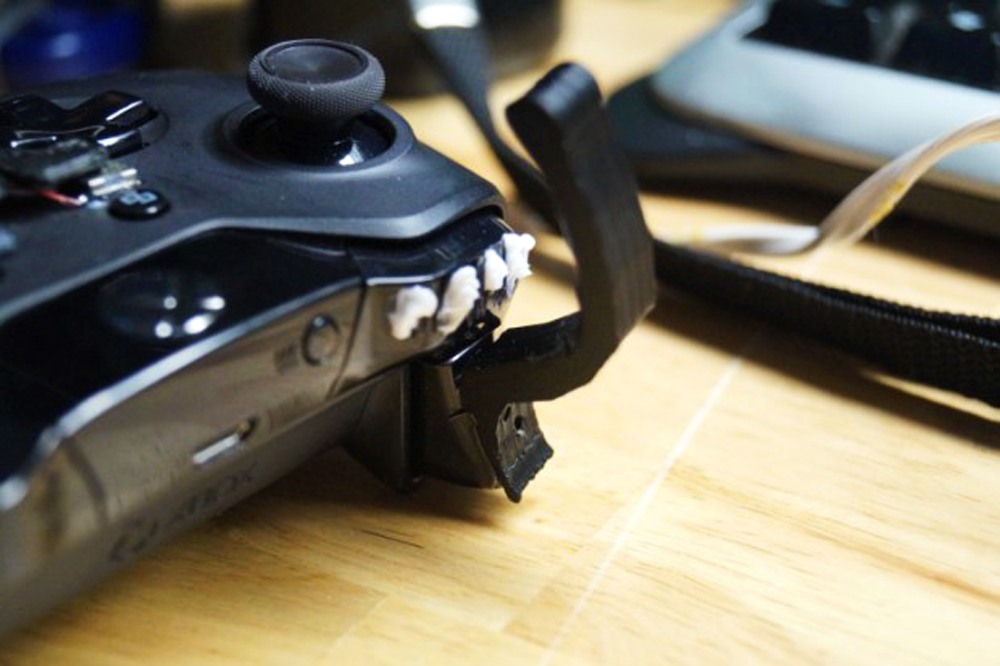 The next project may involve some work with the shoulder button of the controller, as Jay’s finger tends to slide off the button when he uses it.  Though Caleb has used some silicon and his dremmel tool for a quick alteration, it could be that there is still some work to be done.  For now, users with the skills and know-how can try adapting Caleb and Jay’s trigger extender solution to their own controllers by downloading the prints from Thingiverse or Youmagine.  Caleb is even offering his own services to those without access to a 3D printer. You can find his email at the bottom of the source article below.