Politically-minded 3D artist Fernando Sosa has made yet another popular 3D printed butt plug. Once again, the plug is not popular for its possible uses, but, instead for its satirical nature. This time, his target is candidate for the world’s most obnoxious wealthy bankrupt television personality Donald Trump. 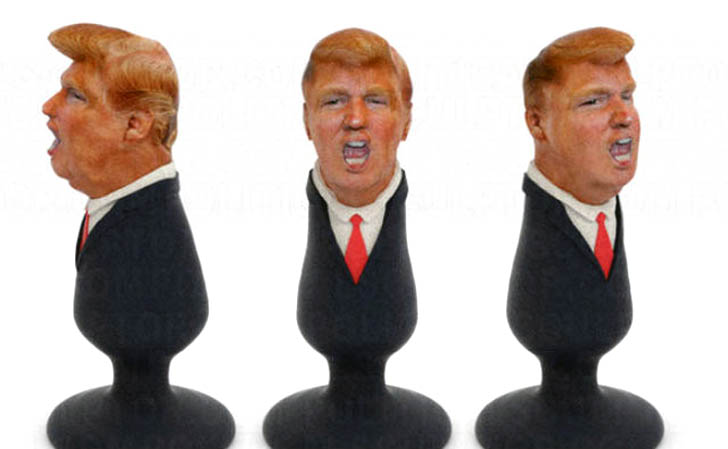 Trump has said countless stupid and terrible things, but among the most recent, he made the racist claim that Mexican immigrants are criminals, drug addicts, and rapists.

When Mexico (meaning the Mexican Government) sends its people, they’re not sending their best. They’re not sending you (pointing to the audience). They’re not sending you (pointing again). They’re sending people that have lots of problems, and they’re bringing those problems to us. They’re bringing drugs.They’re bringing crime. They’re rapists. And some, I assume, are good people! But I speak to border guards and they tell us what we’re getting. And it only makes common sense. They’re sending us not the right people. It’s coming from more than Mexico. It’s coming from all over South and Latin America, and it’s coming probably from the Middle East. But we don’t know. Because we have no protection and we have no competence, we don’t know what’s happening. And it’s got to stop and it’s got to stop fast.

It wasn’t until the paper bag with a spray tan attacked Mexican immigrants that Fernando saw it fit to attack him back, designing one of his best political butt plugs to date (in terms of detail). The Trump butt plug is currently available for purchase on Shapeways and is listed with, as always, an astute diatribe from its creator:

I usually make Butt plugs to insult dictators, homophobes and politicians. However, when i heard Donald Trump’s remarks about Mexicans and latinos from south america i was extremely angry. You see I was born and raised in Mexico and moved to United States when i was 11 years old. So i don’t approve of what Donald Trump, Ted cruz and the republican party have to say about us hard working americans.

I seen people blaming us for taking “their” jobs instead of corporations and Republicans that give tax incentives to corporations that outsource American jobs. I seen Klans man blaming us for infectious diseases instead of lack of healthcare and vaccinations. I seen people label us as drug mules even though America sends their guns and their drug money to south america while American Banks Laundry the drug money. However, this whole new talking point of south America is sending their rapists and their worst is a new accusation and i’m pretty familiar with racists in America. Latinos and immigrants have become the sacrificial goat that republicans love to pick on because even though we are millions we don’t come out and vote. So this is why Republicans like to beat us down in order to get ratings and votes from their racist base voters.

If you’d like to read his complete rant or purchase the “Trump AKA ‘Fuckface von Clownstick’ plug” from Shapeways for $27.99, head over to Fernando’s storefront here.  One thing to wonder though, pointed out by a friend on Facebook, is why a butt plug is seen as a bad thing and not a sign of respect, since they bring some people so much pleasure.  The answer, which my wife pointed out to me, may be that the subjects of Fernando’s art themselves would be insulted by the depictions.