Voxeljet, the manufacturer of the largest 3D printer platforms available to date, has revealed an application of the technology that is both aesthetically pleasing fit for purpose. The application has been developed in collaboration with designer, François Brument, who takes a close look at the possibilities of digital design with integrated digital production processes to create living spaces. 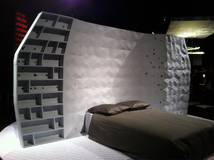 Brument is breaking from traditional approaches in which architecture, interior design and furnishings form separate self-enclosed areas to combine these areas into one unit. As such, rooms, walls and furniture items become one and can be freely defined by the designer and builder without restriction.

His current project ‘Habitat imprimé’, which translates to ‘printed living space’, is the result of a collaborative effort with Sonia Laugier and is a real model of a bedroom with integrated shower and walk-in closet, which visualises the possibilities of integrated production of living quarters offering 15 square metres of space. The room can be customized and divided as required — shelves can be integrated into walls, surfaces can be structured in any manner desired. 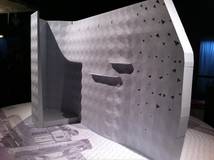 Brument collaboration with voxeljet began back in May 2011, at which time he was very excited about the technical possibilities offered by 3D printing technology. After extensive discussions with voxeljet’s experts, it was clear that the Augsburg-based company could provide the perfect solution for his project. The designer was particularly impressed with the large-format VX4000 printer at the voxeljet service centre, which can print very large moulds with a maximum volume of eight cubic metres and could fulfill Brument’s vision.

The team at voxeljet’s service centre worked with Brument’s digital designs  and the VX4000 3D printer successfully built the entire living space, including furniture, shelving, wash basin and all of the technical installations, in a total of 64 moulds, which could then be assembled into the full unit.

Voxeljet’s CEO, Dr. Ingo Ederer, commented on this project and where it is leading: “As a manufacturer of 3D printers with an attached service centre, our ideas are anything but conventional. Still, we were both surprised and inspired by François Brument’s creative approach. The ‘Habitat imprimé’ project is a milestone for the 3D print technology and drives forward our activities for the development of printing systems for concrete.”

This pioneering project highlighting the scale of what can be achieved with large scale 3D printers can be viewed at the VIA Gallery in Paris until 17 March 2013 and subsequently at the Off-site Salone in Milan from April 9-14.