In the 3D printing industry everything moves so fast — and guns are generally such a big issue worldwide — that in a few short months 3D printed guns have gone from a widespread curiosity to a big deal, at least in the media (Wired USA just did a big piece on it) and now also in the legislative field.

Carl Judge from the PUP Party in Queensland, Australia is the first to propose specific legislation to outlaw not only the possession, distribution or manufacture of 3D printed weapons, but also the unauthorized publishing or swapping of digital blueprints and detailed instructions.

The Weapons (Digital 3D and Printed Firearms) Amendment Bill 2014 in Australia is extremely detailed and basically amends the Weapons Act 1990 to include 3D printed weapons as well and introduce specific penalties according to the 3D printed gun category. It also introduces a specific procedure for obtaining a digital firearm license.

For Judge it is just a matter of acting early to address an issue that he sees as a real threat to society. “Nowadays there are well founded and serious concerns that such firearms will infiltrate our community and this very real risk requires a timely and comprehensive response,” he said in a statement. “The Bill that I have introduced into parliament provides that response.”

Gun defenders argue that guns do not kill people as much as people kill people. The alleged killer in the recent, tragic Isla Vista massacre certainly did not need to 3D print himself a gun to get his hands on one, and, even if he had 3D printed it, he likely would not have bothered to get himself a license. Australia gun laws are more restrictive than in the US but guns are not outlawed down under. 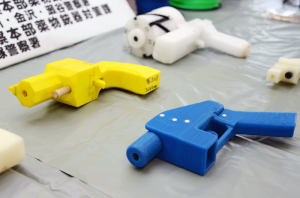 The Australian bill could serve to make people more aware that 3D printed guns are just as dangerous as traditional guns and avoid other cases like Yoshitomo Imura’s in Japan, who was arrested with a full arsenal of 3D printed guns and said he simply did not know them to be illegal.

It is unlikely, however, that the bill would succeed in keeping people from swapping files and keep databases on how to 3D print guns. While it could be argued that gun availability may make their use more likely, it seems more difficult to extend the concept to 3D models and instructions: although it is obvious they could be used for manufacturing a gun, the digital files themselves are not a weapon. What about future video game guns for example, will they be made illegal too if they become too realistic?

My personal opinion is that either all guns are banned or none. I do not see the point in targeting 3D printed guns specifically other than to make this a bigger issue than it should be. That said, there is no doubt in my mind that we are going to see and hear a lot more on this subject in the months and years to come — there are just too many strongly held, but directly opposing convictions on this whole issue.