3D printing musical instruments is not an entirely new concept for anyone following the progress of the 3D printing industry. The first notable instrument to be 3D printed was reported from MIT, where a team used 3D printing to replicate a flute. Then last year, The Economist published an article that covered how a Stradivarius violin replica was produced using 3D printing technology. And it actually sounded good!

Furthermore, electric guitar bodies have been printed at the Massey University School of Engineering, lead of Olaf Diegel, for almost a year now. Oh, and if you missed the 3D printed amps for electric acoustics, take a look at this video.

But last week Bloomberg Businessweek reported on Scott Summit’s holiday project — he spent a week in the mountains with his computer creating a 3D model of an acoustic guitar. Scott, a huge advocate of 3D printing and its capabilities, is traditionally associated with medical applications for the tech. However, it is clearly a passion that he has applied to other areas of his life. Acoustic guitars are not an easy instrument to produce — even for a traditional guitar maker. There are many challenges to overcome, including the pressure that is caused by the 6 tuned strings (close to 200 pounds). Nevertheless, Summit was determined to give it a go, whether he achieved a successful outcome ….. or not: “I thought it would at least be cool if the guitar exploded,” he commented.

The first printed version turned out to be a fairly good sounding guitar and as Summit characterized, “It’s rich and full and has a great tonal range.” He still wants to develop the model further, including some radical experiments that aim to develop the sound range further.

This, and other instrument experiments with 3D printing, will prove to be very interesting for any music enthusiasts looking for a new and unique sound, and, we hope will give rise to new music styles and creativity.

We think it is amazing just how far the impact of 3D printing pervades already — what do you think? 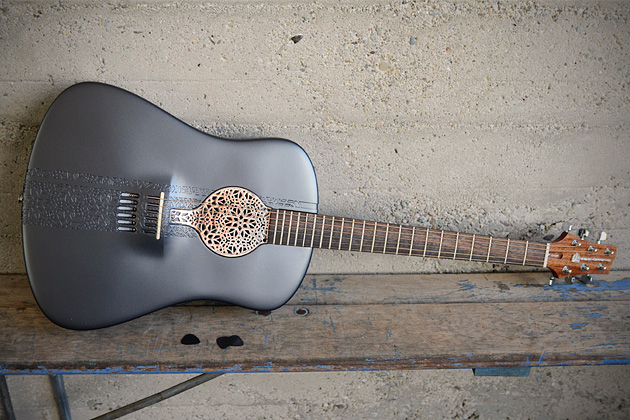