3D Print Your Minecraft Character into the 3rd Dimension

Minecraft went from being the quaint dream of an independent Swedish video game developer to Microsoft-owned cultural phenomenon in game form, selling over 60 million copies worldwide on multiple platforms.  Such a successful brand has plenty of opportunities for merchandising.  To take advantage of those opportunities, more than 3D printing company has come out with its own 3D printed Minecraft customization app. Minetoys, for instance, uses the FabZat platform to give Minecraft players the means for 3D printing their own blocky avatars. Now, Behold 3D Me has released its own Mine-craft 3D printing product called Mycraft.  Given the video game’s popularity, it looks like there’s more than enough room for competing 3D printing services. 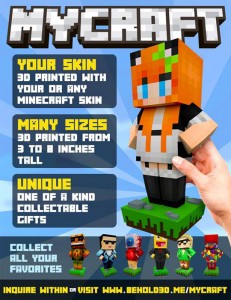 The Lancaster, California-based startup has launched Mycraft to give Minecraft fans to 3D print their own custom figures based on Minecraft skins.  Unlike mass manufactured products, which involve single colored plastics adorned with colorful stickers, Mycraft (as well as Minetoys) rely on 3D Systems’ CJP 3D printing process, resulting in full-color gypsum prints. To have your Minecraft avatar 3D printed in a range of sizes (3, 4, 5, 6, or 8 inches), users can simply input their user name and have their character printed.  If a user’s Minecraft skin uses multiple layers, however, customers are encouraged to contact Behold 3D Me to have the skins manually altered for printing. Prices range from $35 to $199, as one might expect from the CJP printing process. 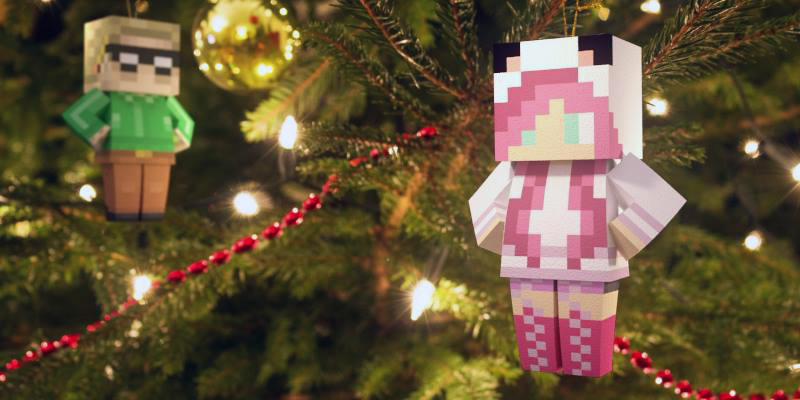 Unlike Minetoys, which gives users the opportunity to upload custom skins or choose from a library, Mycraft only allows users to insert their username to generate the 3D printed character. Mycraft, however, has only just launched and, in contrast to Minetoys, the product is part of a larger venture. Behold 3D Me also offers the ubiquitous 3D printed selfie figurine, but also retails 3D printers, scanners, 3D printing workshops, and scanning and 3D printing services. In other words, Mycraft fits nicely alongside Behold 3D Me’s other offerings.