One of the most impressive — and seemingly fastest growing — 3D printing start-ups is 3D Hubs. The premise behind the company, originating from the Netherlands, is a global network of localized 3D printers providing straightforward and easy access for anyone. Today the company has announced a significant marker of its success since launching just under a year ago, namely the growth from 500 to 5000 3D Hubs locations worldwide in more than 80 countries. This the founders believe testifies to 3D Hubs achieving critical global mass, and translates to the 3D Hubs printer network now providing 3D printer access to more than 750 million people globally within 10 miles of their home. This is an amazing statistic, that I believe is wholly relevant, because while analysts and, of course 3D printer manufacturers, focus on the numbers of 3D printers sold, this one speaks of accessibility to 3D printing. 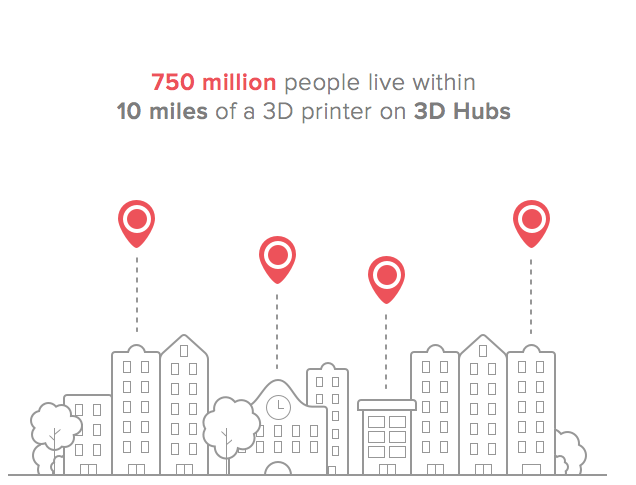 To see how this translates geographically, 3D Hubs has provided a recent map showing the more than 5,000 3D Hubs global printer network locations. It is perhaps not surprising to see condensed hubs across North America and Europe, but it also illustrates an impressive geographic spread, with a couple of holes still to fill.

In terms of the densest populations, by city, Milan comes out on top (Davide will be delighted) with 89 3D printers, closely followed by New York  with 81 printers and then Amsterdam (66), Los Angeles (62) and Antwerp (61). London and Paris are also in the top 10, with three other Dutch cities — The Hague, Eindhoven and Utrecht.

Commenting on this milestone, Bram de Zwart, CEO and co-founder of 3D Hubs said: “We are excited to alter the way people make and distribute products, and are proud to offer a service that is increasingly being used for end-products that have a direct, positive impact on people, companies and the environment.” This was backed up by Brian Garret, 3D Hubs’ CTO and other co-founder: “Our goal is to turn the manufacturing industry on its head, and enhance our market position through increased speed and direct communication with a local 3D printer operator.”

3D Hubs and its community of makers are disrupting the manufacturing supply chain, making production local, on-demand and personalized by providing broad and local access to 3D printers and allowing consumers to create models and unique products that can be locally produced and in their hands in a matter of days, instead of weeks.

The extensive 3D Hubs community and its ongoing 3D printing events, allows makers and 3D printing enthusiasts to come together and exchange knowledge about 3D printing. Demonstrating the power of the combined capacity of its network, the 3D Hubs printer network could collaboratively 3D print a life-size, 305 foot (93 meter) replica of the Statue of Liberty in less than one week, as shown here.

On another note, 3D Hubs was recently named in the report Cool Vendors in 3D Printing, 2014, by leading industry research firm, Gartner.