Although the enthusiasm around making 3D objects can help us overlook the fact that these objects are often far from perfect, after 3D printing things at home, or at the office, there are times when you just need to do away with rough edges and the remains of support materials. This is the post-production – or finishing – stage, and, much like the design phase, is one of the most time consuming aspects of personal manufacturing.

Although not every 3D printed product needs to be finished, a not-to-be-underestimated percentage of them does, and could use machines based on acetone vapors such as the 3D Finisher. Developed as a project by T3D (TechnoDeal Srl), a spinoff of Pisa’s Scuola Superiore Sant’Anna University (one of Italy’s leading academic institutions for the study of robotics), the 3D Finisher could realistically be one of the few low cost, commercially available finishing machines when it hits the market this upcoming winter. 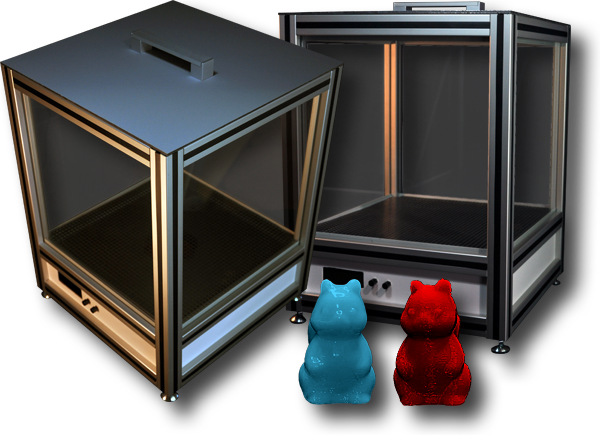 Another similar system, launched on Kickstarter earlier this year, blew through its fundraising goal, obtaining more than $110,000 — $90,000 more than its initial objective: however it has not launched yet, giving 3D Finisher the opportunity to capitalize on the market’s high receptivity for this kind of technology.

Critics argue that a box system is not necessary for implementing acetone vapors but the 3D Finisher manufacturers, in turn, argue that an enclosed desktop solution with a 30 x 30 x 30 cm internal volume, aluminium case with unbreakable glass walls can greatly contribute to streamlining the finishing process, by setting up a precise countdown in order to apply the right amount of acetone to the print.

In fact, according to what Marcello Calisti, one of the 3D Finisher’s inventors, told me, by accurately regulating the time of exposure, the machine could be used to finish ABS prints as well as PLA printed objects. “Makers will find it to be an easy to use and affordable, fast and effective device that can greatly increase the quality of their pieces.” Calisti went on to say: “Smooth surfaces will improve the properties of miniatures, drones, architectural projects, and of any sort of complex geometry requiring some level of refinement”.

If the company succeeds in getting its production line up and running by Christmas 2014 as planned, the many 3D printed Christmas gifts that makers worldwide – dressed up as Santa’s helpers – will be manufacturing, are going to be a lot nicer to look at and play with.