3D bioprinting, a type of 3D printing, is a rapidly growing field with more players entering the arena every day. Complementing this growth, 3D bioprinting patent filings are trending upward. 3D bioprinting is a hot area for intellectual property (IP), given the innovation-rich and young technologies involved.

As one can imagine, a tremendous amount of research is needed to develop successful machines, methods, materials, processes, and products in this field. With so many aspects of 3D bioprinting being new and unprecedented, many companies and inventors are seeking patent protection to safeguard their efforts, while enriching the 3D bioprinting industry with their inventions. This article looks at how the 3D bioprinting field has grown, and at the emerging IP leaders.

The Many Players, and the Few Leaders

The search identified over 100 companies that own 3D bioprinting patents or pending applications. The list was diverse, showing that innovations in the field are originating from many different parts of the world and from companies both big and small. Amidst the large pool of companies, there are trends and emerging leaders in 3D bioprinting patent protection. The chart below shows the companies with the largest portfolios of patents and published applications at this time (these companies may own patents or applications that were not picked up by the search, such as unpublished applications):

As a recognized leader and pioneer in 3D bioprinting, it was no surprise that Organovo made this list. Our time-lapsed search results showed that Organovo doubled its US and foreign IP portfolio in the past year alone. Wake Forest University and Koninklijke Philips, also at the top of this list, hold sizeable patent portfolios in 3D bioprinting, and the top 3 companies outnumber the rest by significant margins. Other companies and research universities are also steadily growing their patent portfolios, such as Hewlett-Packard, the University of Texas, Medprin Regenerative Medical Technologies, and Corning.

Issued Patents and Published Applications May Not Tell the Whole Story…

Nonpublication is a tactic used to keep innovations secret while the application is pending, and this tactic can be especially useful when the patent application is pending for years. Issued patents are always published, so there are no secret patents in the 3D bioprinting industry. But just as 3D printing has stunned manufacturing industries, these currently unknown unpublished applications could yield new patent portfolios that shift power to industry newcomers. Time will tell, as the patent landscape evolves and both published and unpublished bioprinting patent applications issue as patents. 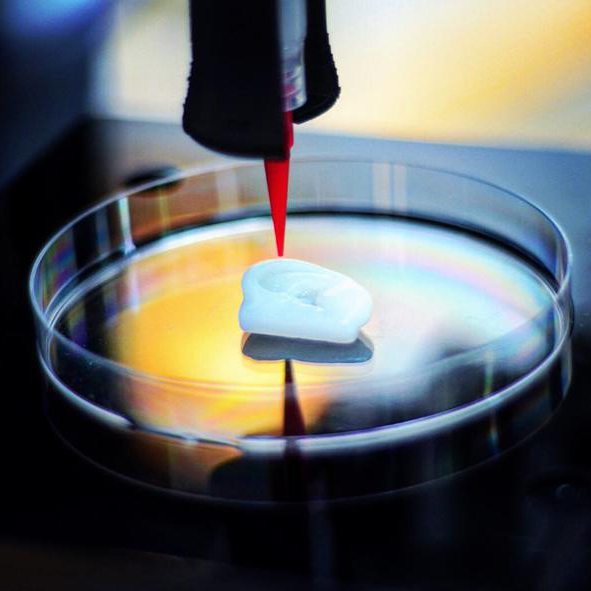 The Patent Landscape is Ever-Changing

While this article identifies current IP leaders by portfolio size, the leaderboard will probably see some shuffling and new names in the coming years, as 3D bioprinted products inch closer to FDA approval and widespread use in clinics and hospitals. For example, companies are now partnering to develop and patent specific products, such as kidney cells, which may begin FDA testing in the coming years. For products that will interact or reside within the human body, FDA testing and approval is the gateway for many companies to profit. A path toward FDA approval will attract more companies and partnerships between companies, both of which usually bring more IP to the field. Companies with deeper pockets will purchase patents and acquire companies, thereby consolidating or shifting the bioprinting IP power structure. But portfolio size is not all that matters. A company with only a few patents could hold the secret sauce to a highly successful and FDA-approved product, so it is important not to count anyone out in this pioneering age for 3D bioprinting.

John Hornick has been a partner at the Finnegan IP law firm, which is based in Washington, DC, for over twenty years. Part of his practice focuses on the IP issues of 3D printing. He is also the author of the award-winning book, 3D Printing Will Rock the World. Kai Rajan is a patent prosecution and litigation attorney at the Finnegan IP law firm. His practice focuses on drafting and prosecuting patent applications and patent litigation in a broad range of technologies, including electrical and computer technologies, healthcare IT software and systems, business methods, and mechanical technologies. He also focuses on the IP issues of emerging technologies, such as 3D printing.