So while direct advertising at Wimbledon is still prohibited, and always will be, I heard an LTA heavyweight claim yesterday, it seems that gimmicks are not. 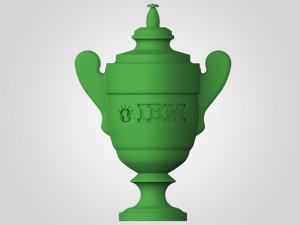 IBM is a Wimbledon partner, and provides all of the real-time data during the preeminent grand-slam fortnight in SW19. There is indeed no doubt that this is a phenomenal task and one that is fulfilled seamlessly and successfully by the computer giant.

However, this year, all of the live statistical streams are being brought to life in a fun way courtesy of the IBM Kiosk and nine Ultimaker 3D printers. The project has been run and organised by 3D Printshow. Basically, the IBM Kiosk is combining in-match player statistics (double faults, aces, % 1st serves in etc) with social media sentiment about the competitors (shock, horror, Mr Murray features heavily) to provide a regularly updated leader board that ranks the tennis players accordingly. The 3D printers are then used to produce a specially designed trophy for the leading player(s) every 20 minutes (takes longer to print, approx 2.5 hours, but with nine printers on the go, they can produce them at that rate), personalized of course, with their names printed into the trophy. 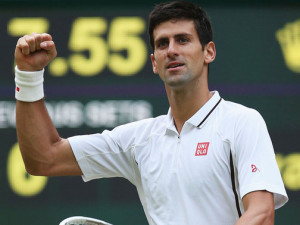 I’m not exactly a year-round tennis fan, but I am guilty of being a Wimbledon sucker — even when the Brits come crashing down. I totally raise my hopes, every year, and suffer the consequences as a result. Reminiscent of England and world cup years.

Novak helps with the disappointment though!

The video below explains the IBM Kiosk in more detail and offers some feedback from real tennis fans, who seem quite taken with the 3D printers too — well, who wouldn’t be seeing them up close for the first time!?