Type A Machines — the San Francisco based company behind the Series 1 3D printers — continues to reach out to its growing community. Type A Machines is a proud sponsor of Michigan Tech‘s 3D printing contest — 3D Printers for Peace —  which was launched earlier in the year and is running through until 1st September. More recently the company had a presence at the DEFCON Hacking conference in Las Vegas at the end of last week and over the weekend. The Series 1 3D printers were available for viewing and on sale at the UNIXSurplus and FilamentSupply.com stand. In honor of its own hacking roots and in line with the conference ethos, Type A Machines is conducting a hacking challenge, which if successfully completed entitles the hacker to a $150 discount off the Series 1 3D printer.

The company released an encrypted code ahead of DEFCON and it is open to being broken until 31st August. The code is given below for anyone that fancies having a crack at it: 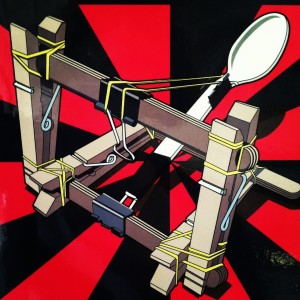 A further challenge from Type A Machines, seemingly contradicting the peaceful aims of the company as depicted above, is its Desktop Warfare 3D printing challenge. In reality, it’s actually a kinda fun contest to design and build a mini weapon of desktop destruction — a catapult, ballista, trebuchet or such like. The kind of thing my son is currently obsessed with and tries to make out of paper / card / bits of tree etc. I really am going to have to get him a 3D printer sometime soon — his design and make skills are getting stronger by the day. He’s nine this week. To participate in this destructive challenge, entries need to be submitted via the Type A Forum, the deadline is August 15th. Rules and prizes can be found here.

And as Type A points out — only the most brilliant mind can participate in both this and the 3D Printers for Peace challenge!